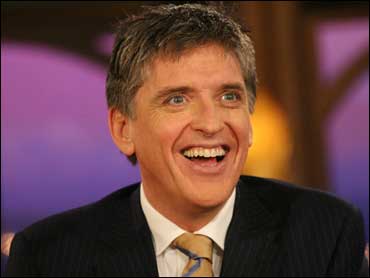 Craig Ferguson decided not to poke fun at Britney Spears, at least for now.

Ferguson, host of "The Late Late Show" on CBS, told viewers Monday that after seeing photos of the bald female pop star, he reconsidered making jokes at the expense of the "vulnerable."

"Tonight, no Britney Spears jokes. Here's why: The kind of weekend she had, she was checking in and out of rehab, shaving her head, getting tattoos. That's what she was doing this weekend," he said on his show. "This Sunday I was 15 years sober. I didn't do it for anyone else but myself. I did it because it was an act of conscience. I'm amazed that not poking fun of somebody has become a news story."

"For me, comedy should have a certain amount of joy in it," Ferguson said. "It should be about attacking the powerful — the politicians, the Trumps, the blowhards — going after them. We shouldn't be attacking the vulnerable."

Ferguson said that other comics like David Letterman, Jay Leno and Jimmy Kimmel are free to do whatever jokes they want, but in light of Anna Nicole Smith's death, he said people should realize that addiction isn't a joke.

"I think there's an edit button missing somewhere," Ferguson told E! entertainment news anchor and The Early Show correspondent Giuliana DePandi. "I think that as a society, we should look it up every now and again. I think that society, there's something, kinda social, socially lacking … I won't do this show for demographics, I won't do it for viewers, I certainly won't do it for money, as it turns out, because I work for CBS, this is about doing something that I have fun doing and I believe in doing."

Ferguson said he doesn't know if Spears is an alcoholic, but she is clearly suffering.

"I don't want to talk about sick people like that," he said.

Spears made headlines over the weekend when she shaved her head at a Los Angeles hair salon and then went to a tattoo parlor where she had a pair of lips put on her wrist. The appearance came the same day as reports on TV and Web sites that Spears had briefly checked into a rehabilitation center.

Despite the media frenzy that is surrounding Spears' demise, Ferguson said fans are responding well to the stand he has taken.

"Thousands of e-mails have come pouring into CBS with people saying, 'Good job,' " he said. "I would have done it anyway, though. You have to understand this. The other side of this, for CBS, that you have to understand, is, if this was a less popular stance, I'd still be taking it."