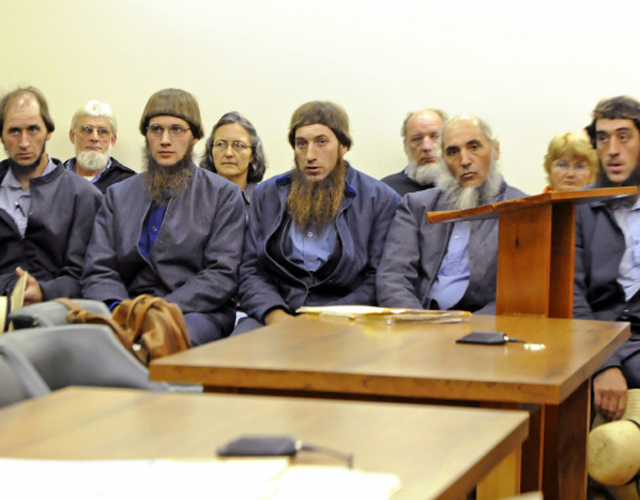 CINCINNATI - An appeals court panel on Wednesday overturned the hate-crime convictions of 16 Amish men and women in beard- and hair-cutting attacks on fellow members of their faith in Ohio, ruling that religion wasn't their driving motive.

A 6th U.S. Circuit Court of Appeals panel sided with arguments brought by attorneys for the Amish, convicted two years ago in five attacks in 2011. The attacks were in apparent retaliation against Amish who had defied or denounced the authoritarian style of Sam Mullet Sr., leader of the Bergholz community in eastern Ohio.

In a deeply divided decision, two of the three judges on the panel concluded that the jury received incorrect instructions about how to weigh the role of religion in the attacks. They also said prosecutors should have had to prove that the assaults wouldn't have happened but for religious motives.

"When all is said and done, considerable evidence supported the defendants' theory that interpersonal and intra-family disagreements, not the victims' religious beliefs, sparked the attacks," the judges wrote.

They said it was unfair to conclude that "because faith permeates most, if not all, aspects of life in the Amish community, it necessarily permeates the motives for the assaults in this case."

Church leaders, "whether Samuel Mullet or Henry VIII, may do things, including committing crimes or even creating a new religion, for irreligious reasons," they wrote.

Mullet has served nearly three years of his 15-year sentence, while seven other men in the community are serving between five and seven years in prison. The other eight Amish convicted in the attacks either already served one year in prison and have returned to their communities or are about to be released from two-year sentences.

Defense attorney Wendi Overmyer, who represents the Amish, said she likely would be seeking the release of Mullet and the seven other men as the government considers its appeal options.

"Sam and the rest of the defendants pose no danger to the community, they don't pose a flight risk," she said. "They're needed at their homes."

Amish, who live in rural communities organized around bishops, dress and live simply and shun many aspects of the modern age such as electricity, refrigeration and computers. They don't drive and often get around in horse-drawn buggies or by paying drivers to shuttle them places.

They believe the Bible instructs women to let their hair grow long and men to grow beards once they marry. Cutting it is considered shameful and doing so forcibly is considered offensive.

In a strong dissenting opinion of the 6th Circuit's Wednesday ruling, Judge Edmund A. Sargus, Jr. wrote that religion was a clear motive for the 2011 attacks and that the hate-crime convictions were appropriate, especially against Mullet.

Sargus quoted several statements made by Mullet acknowledging his religious motivations, including in an interview with The Associated Press in which he said that the goal of the hair-cutting was to send a message to the Amish community and that he should be allowed to punish people who break church laws.

The convictions of members of the Bergholz community marked the first involving religion under a federal hate crime statute enacted in 2009 in response to the murders of Matthew Shepard because he was gay and James Byrd Jr. because he was black.

Attorneys for the Amish defendants have argued that the statute was meant for egregious offenses motivated by race, sexual orientation and religion, not for what their clients did.

"The impetus behind the hate-crime statute, the Matthew Shepard tragedy and James Bird - those are heinous, egregious, tragic crimes, and I think in responding to those crimes, (the statute) is a little overbroad, and I think it can have an effect that perhaps Congress didn't intend," Overmyer said. "This is a really good case that exemplifies where that line can be drawn of what is a hate crime and what is not a hate crime."

At sentencing, Judge Dan Aaron Polster said it was clear to him and the jury that the attacks were motivated by religion and that "anyone who says this is just a hair- and beard-cutting case wasn't paying any attention."

"These victims were terrorized and traumatized," he said. "(The attacks) were calculated to inflict the maximum emotional trauma and distress on the victims, and that's what they did."

Three defendants convicted of non-hate crime related charges, such as concealing evidence, did not challenge those convictions.

Mullet, 68, wasn't present for the attacks, but "he directed, assisted, encouraged and oversaw the assaults committed by the other defendants," the government said in a February court filing.

The defense had said there was insufficient evidence linking Mullet to the hair-cutting, especially since he wasn't physically there, while prosecutors argued that he directed the attacks and ruled the community with an iron fist.