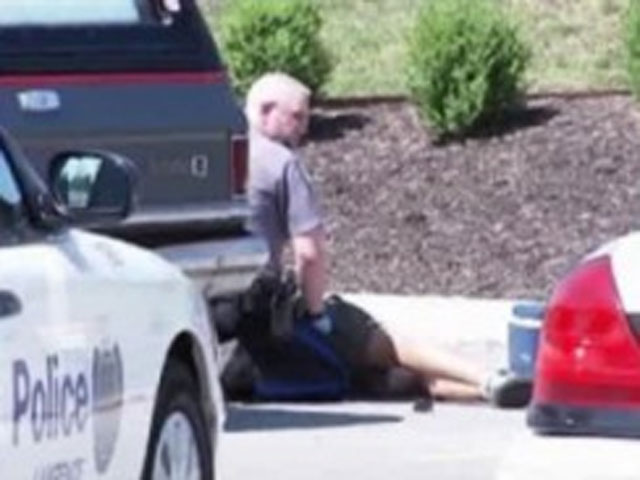 (CBS/AP) LAWRENCE, Kan. - A Kansas judge ruled Tuesday that Adolfo and Deborah Gomez will face trial on child abuse charges after two of their children were found tied up outside a Walmart parking lot tied up. A lawyer for the father said he bound the kids to guard against demons.

In a preliminary hearing, Douglas County Judge Paula Martin said there was enough evidence to try Adolfo, 52, and his wife Deborah, 44, on two counts each of child abuse. The father also faces an additional count of obstruction for resisting arrest.

The Illinois couple has been in custody since June 13 when police found two of their children, ages 5 and 7, tied up and with duct tape over their eyes outside a Walmart in Lawrence. The couple's three other children, ages 12, 13 and 15, were in the family's SUV unrestrained. The children are now in protective custody.

Lawrence police Detective Randy Glidewell testified Tuesday that during the arrest, Adolfo told him he was listening to an online preacher who was predicting the end of the world and that a "darkness had come over the house" in Illinois. The family left their suburban home because they thought the world was coming to an end, Gildewell said.

The detective also said Adolfo Gomez told him he hadn't slept in nine days, and that Gomez was concerned about one of the younger children because the child was "acting like he was possessed."

"He was scared (the child) would hurt some of the kids," Gildewell said.

Lawrence police officer Hayden Fowler testified that one of the older children told him the family believed there were "demons" in their home and outside their SUV in the parking lot, and that the vehicle's windows were covered to keep the demons out.

Adolfo's lawyer, Skip Griffy, said that blindfolding and binding the younger children was part of the family's religious beliefs, and that it was not done frequently or as a punishment, but as a way to protect the children from demons.

"Their actions were taken out of their religious beliefs, that these children were possessed," Griffy said. He added that the children had no injuries.

Angela Keck, Debora's lawyer, said the woman had no control over her husband.

"She was doing her best to protect herself and her children when Mr. Gomez was having a kind of religious experience," Keck said. "You have not heard anything that these children's lives were in any danger in any way."

"These types of bindings and blindfolds come into play when you're talking about ... prisoners of war," Moody said.

Moody also added that when Deborah was presented with an opportunity to help, "she went shopping for duct tape, two tarps and a baseball bat," alluding to the list of items police discovered in the mother's shopping cart at Walmart when the children were found.

"It was a team effort, your honor," Moody said. "What happens when kids in the Gomez family are possessed? They get bound and they get blindfolded."