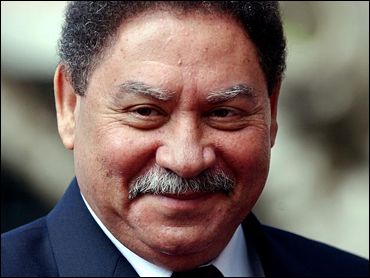 Renegade troops said Wednesday they had deposed the government of this tiny West African island nation and intended to appoint new leaders to rule during a transition period.

In a statement read on state Radio Nacional de Sao Tome, the troops said they acted "due to the continuing social and economic decline of the country."

It was not known how many troops were involved and the statement did not say how long the transition period would last.

The rebelling troops appealed to the international community not to intervene, saying the people of Sao Tome could resolve their problems alone.

The leaders of the revolt were not named in the statement, which was read aloud by an unidentified man.

President Fradique de Menezes was out of the country, on a private visit to Nigeria.

Sporadic gunshots were heard throughout the morning in the capital, Sao Tome, though it was not clear whether the shots were from fighting or were fired into the air as a warning. No injuries were reported.

The gunfire faded by late morning and the capital's two main markets opened for business but the streets were mostly empty. Public buildings and most shops remained closed. The radio played mostly music. State television was not broadcasting.

Earlier, Maj. Fernando Pereira — the head of military training and a participant in the rebellion — read an initial statement over the radio ordering all government officials and lawmakers to report to central police headquarters.

Health Minister Claudina Cruz and Justice Minister Justino Veiga, as well as about 30 lawmakers out of the 55 who sit in Parliament, handed themselves over to the mutineers, a police source said on condition of anonymity.

Executive power in Sao Tome lies with the prime minister and Parliament. The head of state has veto power over laws and can dissolve Parliament and dismiss the government.

Sao Tome's Foreign Minister Fernando Meira Rita said he had information that the mutineers were army veterans linked to the Christian Democratic Front, a party which has no seats in Parliament.

"We recognize there are social and economic problems but there's no reason for the renegades to go ahead with this coup attempt because power is won at the ballot box, not through violence," Meira Ritta said in Lisbon, Portugal, where he was on an official visit.

Soldiers in recent months have complained about low pay and poor living conditions. The country's armed forces number about 600.

Army officers rebelled in 1995, forcing the government to step down and hold new elections. They gave up their attempt to take power after the United States and the European Union threatened to cut off vital aid.

The rebellious soldiers took control of the presidential palace, the parliament building and the airport, the radio report said. They also seized the central bank premises and the state radio and television headquarters in the capital.

Mozambique's President Joaquim Chissano, who also is current president of the African Union, urged the mutineers to give up their apparent powergrab.

"We condemn this coup and demand that its perpetrators restore constitutional order," Chissano said.

Das Neves was the country's first female prime minister. She was appointed in October of last year in a Cabinet reshuffle by Menezes.

Sao Tome and Principe, a former Portuguese colony off the coast of Gabon, has a population of about 140,000 and is one of the world's poorest countries, according to the United Nations. But the recent discovery of offshore oil in the Gulf of Guinea have brought hopes of quick economic advancement.

The United States has made diplomatic overtures toward Sao Tome and Principe, hoping it and other countries bordering the Gulf of Guinea can provide a more stable source of oil than the Persian Gulf.

Offshore development had been planned in conjunction with Nigeria. International tenders for development of the oil reserves were recently opened, though the results of those bids are not yet known. They were reported to have drawn interest from major international oil companies.

But feuding among rival political parties over the oil wealth has caused political instability. The turmoil has stalled plans to explore the oil reserves.

Since Menezes began his term in September 2001, he has fired four prime ministers and dissolved Parliament once.

In January, Menezes revoked a decree that called for early elections and the dissolving of Parliament after striking a deal with lawmakers eager to trim his powers.

The residents of Sao Tome, which is about twice the size of Houston include angolares — descendants of Angolan slaves — and contract laborers from the African mainland known as servicais.