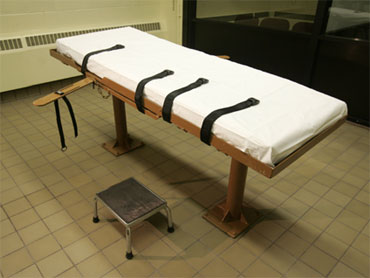 The execution of Oklahoma death row inmate Clayton Lockett in April 2014 was, by all accounts, thoroughly botched. The memories of those who witnessed the lethal injection have a decidedly gruesome quality to them. One likened the scene to something you'd see in a "horror movie."

"He was conscious and blinking, licking his lips even after the process began. He then began to seize," Associated Press reporter Bailey Elise McBride tweeted shortly after the execution.

"He kicks his right leg and his head rolls to the side. He mumbles something we can't understand," reported Tulsa World reporter Ziva Branstetter. "He begins rolling his head from side to side. He again mumbles something we can't understand, except for the word 'man.' He lifts his head and shoulders off the gurney several times, as if he's trying to sit up. He appears to be in pain."

One attorney present "began crying as Clayton began to have this violent reaction," Branstetter later told NPR."This is my fourth execution to witness, but I've never seen anything like this during an execution."

Lockett, who was sentenced to death for killing a 19-year-old girl in 1999, was injected with a drug cocktail that included a sedative known as midazolam. It was 43 minutes before he ultimately passed away.

On Wednesday, the Supreme Court will hear oral arguments in a case that could determine whether the use of midazolam in lethal injections violates the Constitution's ban on cruel and unusual punishment. If the court prohibits the use of the compound, it will mark the first time the justices have ruled a particular method of capital punishment unconstitutional in U.S. history.

The case was brought by a group of Oklahoma death row inmates. The plaintiff, Richard Glossip, is the next inmate scheduled to be executed in the state. The Supreme Court granted a stay of Glossip's execution on January 28, just one day before he was scheduled to be put to death. Another of the state's death row inmates, Charles Warner, was executed just two weeks before that.

Lethal injections in Oklahoma are administered under a protocol that requires the use of a three-drug cocktail. An anesthetic is injected first, ostensibly to dull pain, then a paralytic agent, to prevent movement, and finally the drug that stops the heart. The last time the justices considered capital punishment, in a 2008 case called Baze v. Rees, the Supreme Court upheld Kentucky's method of execution, a three-drug lethal injection which involved a sedative called sodium thiopental. For a number of reasons, though, that drug and another barbiturate used in lethal injections, pentobarbital, have become prohibitively difficult to obtain.

The drug manufacturers "have said that they don't want their life-sustaining medicines to be used in life-taking enterprises like executions. As a result, the companies have discontinued producing the medicine altogether," explained Robert Dunham, an attorney and the executive director of the Death Penalty Information Center, a non-partisan group that compiles information about capital punishment in the United States.

Some states turned to European pharmaceutical companies, but the European Union considers capital punishment a violation of international human rights law, and export protocols have prevented E.U. manufacturers from selling the drug to buyers who might use it for executions. Even compounding pharmacies in the U.S., a relatively loosely regulated industry, have been restricted by the American Pharmacists Association, which moved last year to discourage its members from selling drugs that would be used in executions.

"The drug protocol the court validated in 2008 was no longer available," explained Deborah Denno, a law professor at Fordham University who specializes in capital punishment. As a result, "there's been an explosion of different kinds of protocols that aren't similar to what the court upheld in 2008."

The Glossip case is so pressing, Denno argued, because the court's decision in Baze v. Rees was "ineffective" and states are now "experimenting" with capital punishment. "I don't see how you can characterize it any other way. They're using so many drugs in the execution process that have never been used on a human being before to kill somebody," she explained. "Oklahoma was desperate to find a drug that they could use, and they took one that was not high up on the food chain of choices here."

"It's an anti-anxiety drug, so it's not used in medical procedures that could be painful or require the patient to be in a coma-like state," Dunham said. "As a result, people who have been given midazolam have regained consciousness or not lost it prior to the execution. They have experienced, in several botched executions, prolonged deaths that appeared to be very painful."

A state review of Lockett's botched execution found that an intravenous needle was improperly inserted, causing a vein to rupture before the cocktail could be fully injected. "It's hard to know how much [midazolam] he got, and how much that contributed" to the horrific results, Denno said. "Nonetheless, there have been other executions where midazolam has been a problem."

Indeed, Lockett's was one of three botched executions involving midazolam that made headlines in recent years. Arizona inmate Joseph Wood was injected with the drug in July 2014, and two hours elapsed before he died. Another death row inmate in Ohio lived for 25 minutes after the injection. In addition to Ohio, Arizona, and Oklahoma, at least five other states - Louisiana, Kentucky, Alabama, Virginia and Missouri - have either used or proposed using midazolam as part of their protocol.

The case before the court on Wednesday could effectively halt all of that. The justices "could say that midazolam, as used in Oklahoma or in an Oklahoma-type protocol, is unconstitutional," Dunham said. "They could say midazolam is not necessarily unconstitutional, but here are the circumstances in which it can be used. They could also say for procedural reasons, we're not going to hear this issue. We granted review, but we shouldn't have."

That last potential outcome, he added, is "highly unlikely," given the attention surrounding the three botched executions, and given the fact that a number of justices have already shown their interest in the case. Dunham pointed out that at least four justices must agree to hear a case before it reaches the Supreme Court, and at least five justices are needed to stay an execution, as they did in Oklahoma.

The case comes at a particularly dynamic moment in the politics of capital punishment in the U.S. The drug shortages explained earlier have forced some states to retool their own policies on executions. Utah's governor signed a bill in March permitting the use of firing squads if lethal injection drugs cannot be readily obtained. A similar bill in Tennessee greenlighted the use of the electric chair in the event of a drug shortage. Other states have halted executions while authorities seek a steadier supply of lethal injection drugs or a better understanding of the drugs' effects. In 2013, Maryland became the 18th state to outlaw capital punishment.

Dunham said it's unlikely the court will use the Glossip case as an opportunity to render a more far-reaching verdict on capital punishment. "There is a broad social issue that relates to lethal injection and death penalty policies," he explained. "But the issue in front of the court is a much more narrow one."

"I think that would be surprising, that the court would sweep wider than it has to. That doesn't mean it won't happen," said Denno. "Irrespective of what happens tomorrow, as a factual issue, the poll numbers are dropping...an increasing number of states have found the death penalty unconstitutional. These are just facts...Since 1999 we've seen a precipitous decline in the number of people we've been executing, and the public is so much more aware of these issues."

Supreme Court Justice Anthony Kennedy, concurring with the majority ruling in the 2008 Baze case, seemed to nod at the likelihood of greater judicial engagement with capital punishment in the future.

"I am now convinced that this case will generate debate not only about the constitutionality of the three-drug protocol," he wrote, "but also about the justification for the death penalty itself."