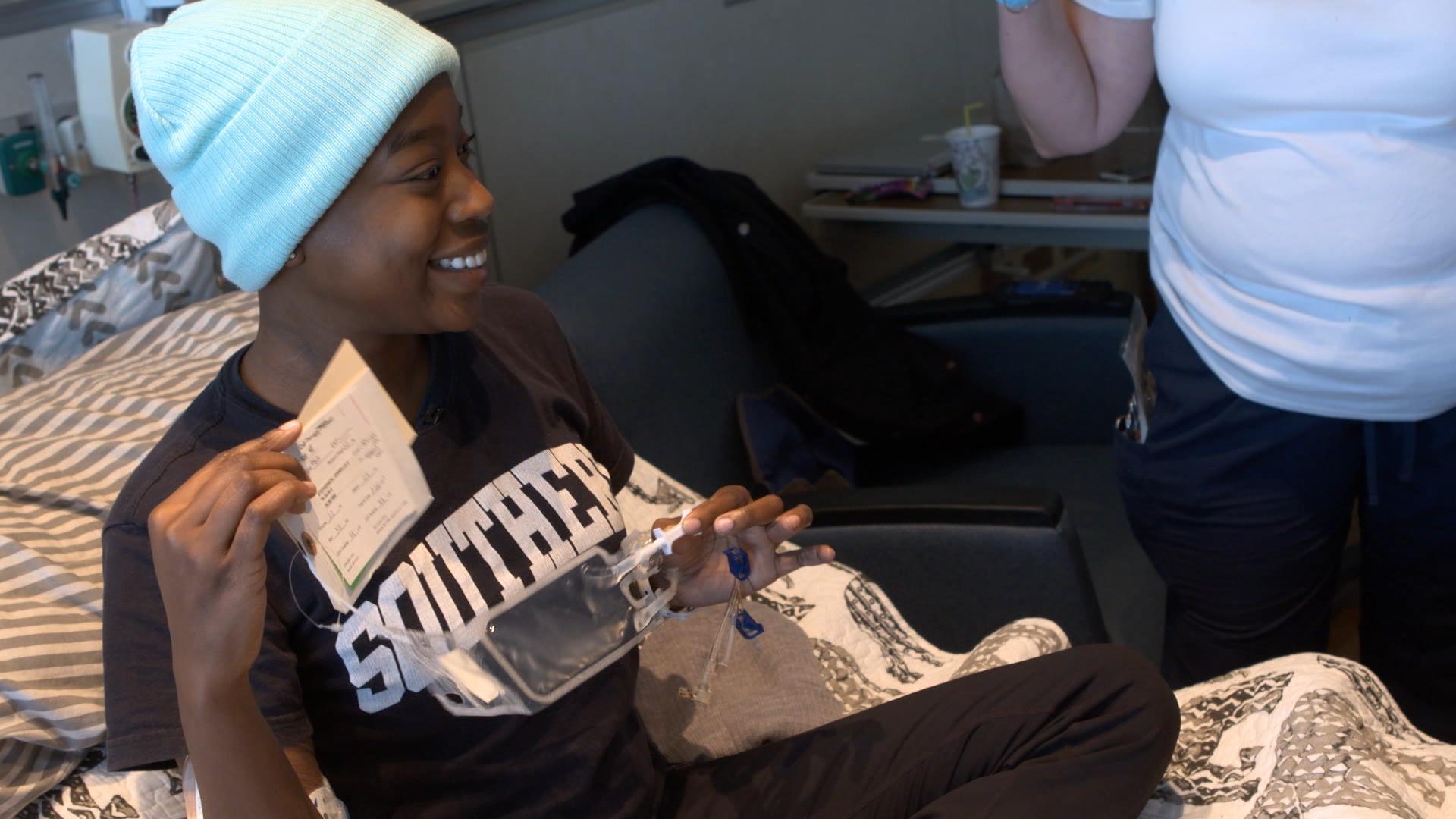 Nearly 20 years ago, scientists stunned the world when they announced they had decoded the genes that make up a human being. They hoped to use that genetic blueprint to advance something called gene therapy which locates and fixes the genes responsible for different diseases.

Now, a clinical trial at the National Institutes of Health is doing exactly that in an attempt to cure sickle cell anemia, a devastating genetic disease that kills hundreds of thousands of people around the world every year.

For the past 15 months we've been following the scientists, and patients, who are ushering in a genetic revolution.

It's the day after Christmas, 2017, and 27-year-old Jennelle Stephenson has come with her father and brother from Florida to the National Institutes of Health, just outside Washington, D.C.

She's one of a small group of patients to receive an infusion containing altered DNA.

Jennelle Stephenson: Merry Christmas to me.

The clear liquid in the bag contains Jennelle's stem cells that have been genetically modified.

Dr. John Tisdale: There are about 500 million in there.

The hope is the new DNA in the cells will cure Jennelle of sickle cell anemia, a brutal disease that causes debilitating pain.

Jennelle Stephenson: We can go beyond a 10. It's terrible, it's horrible.

Jennelle Stephenson: Everywhere. My back, my shoulders, elbows, arms, legs, even my cheekbones, just pain.

Dr. Jon LaPook: Can you actually describe it?

Pain from sickle cell can occur anywhere blood circulates. That's because red blood cells, normally donut-shaped, bend into an inflexible sickle shape, causing them to pile up inside blood vessels. The resulting traffic jam prevents the normal delivery of oxygen throughout the body, leading to problems that include bone deterioration, strokes and organ failure.

The gene that causes sickle cell anemia evolved in places like sub-Saharan Africa because it protects people from malaria. There, millions have the disease, and it's estimated more than 50 percent of babies born with it die before the age of five.

In the United States, it affects a hundred thousand people, mostly African-Americans.

For Jennelle, having the disease as a child often meant spending Christmas in the hospital. As an adult, she struggled through pain to complete college, but keeping a job was tough because something as simple as walking up stairs could trigger "a pain crisis."

Dr. Jon LaPook: Do you have friends who've died from sickle cell?

Jennelle Stephenson: I do. Yes, younger than me.

Dr. Jon LaPook: And you've known this your whole life growing up?

Dr. Jon LaPook: That you could potentially die early?

Dr. Jon LaPook: Did you think you would die early?

Jennelle Stephenson: I did, actually. When I hit about 22, I was like, "You know, I'm-- for a sickle celler, I'm kind of middle-aged right now."

Dr. Jon LaPook: What are some of the things that you've always wanted to do that you couldn't do?

Jennelle Stephenson: Honestly, everybody laughs at me for this, I just want to run, to be honest.

Dr. Jon LaPook: Things that most people would take for granted.

One of the most cruel parts of the disease, Jennelle and other patients have told us, is being accused of faking pain to get narcotics, being labeled a "drug-seeker." During one trip to the emergency department, when she fell to the floor in pain, a doctor refused to help her.

Jennelle Stephenson: And I'm looking up at her, and I'm in tears, and, I'm like, "I'm doing the best that I can."

Dr. Jon LaPook: And you gotta be thinking….

Jennelle Stephenson: I just, sometimes I don't understand, I don't get it. Like... Sorry. I'm in so much pain, and you think I just want some morphine. And it just makes me sad that some people in the medical community just don't get it.

Dr. Francis Collins is director of the National Institutes of Health, the largest biomedical research agency in the world. He oversees a nearly 40 billion dollar budget that funds more than 400,000 researchers world-wide.

Dr. Collins was head of the Human Genome Project at the NIH in 2000 when he made a landmark announcement: after a decade of work, scientists had finally decoded the genes that make up a human being.

Dr. Jon LaPook: When did it all start for you?

Dr. Francis Collins: I got excited about genetics as a first-year medical student. A pediatric geneticist came to teach us about how genetics was relevant to medicine. And he brought patients to class and one of the first patients he brought was a young man with sickle cell disease who talked about the experience of sickle cell crises and how incredibly painful those are. And yet, it was all because of one single letter in the DNA that is misplaced, a "T" that should have been an "A." And that was profound. You could have all of that happen because of one letter that was misspelled.

The double helix of DNA is made up of billions of pieces of genetic information. What Dr. Collins is saying is, out of all that, it's just one error in the DNA code -- a "T" that should have been an "A" -- that causes sickle cell anemia. Fix that error, and you cure the disease.

But figuring out how to do that would take more than 20 years of research and a little serendipity.

Dr. Collins was playing in the NIH rock band in 2016 when his bass player -- hematologist Dr. John Tisdale -- started riffing on an idea.

Dr. John Tisdale: We'd finished setting up and went for a pizza before--

Dr. Francis Collins: I remember that.

Dr. John Tisdale: --before the gig. And at this point I pitched to Francis that it was really time that we do something definitive for sickle cell disease.

In the laboratory, Dr. Tisdale and his collaborators created a gene with the correct spelling. Then, to get that gene into the patient, they used something with a frightening reputation: HIV, the virus that causes AIDS. It turns out HIV is especially good at transferring DNA into cells.

Here's how it works. The corrected gene, seen here in yellow, is inserted into the HIV virus. Then, bone marrow stem cells are taken from of a patient with sickle cell anemia. In the laboratory those cells are combined with the virus carrying that new DNA.

Dr. John Tisdale: This virus will then find its way to one of those cells and drop off a copy or two of the correctly spelled gene. And then these cells will go back to the patient.

If the process works, the stem cells with the correct DNA will start producing healthy red blood cells.

Dr. Jon LaPook: I can hear people, our viewers out there, thinking, "Wait a second, how do you know you're not gonna get AIDS from the HIV virus?"

Dr. John Tisdale: The short answer is we cut out the bits that cause infection in HIV and we really replace that with the gene that's misspelled in sickle cell disease so that it transfers that instead of the infectious part.

Dr. Francis Collins: Make no mistake, we're talking about very cutting-edge research where the certainty about all the outcomes is not entirely there. We can look back at the history of gene therapy and see there have been some tragedies.

Jennelle Stephenson understands. This is a trial with huge risks and no guarantees.

Jennelle Stephenson: This is it.

When she arrived at the NIH clinical center in December 2017, Jennelle asked her brother, Ray, for some help.

She decided to cut off all her hair, rather than watch it fall out from the massive dose of chemotherapy needed to suppress her immune system so her body wouldn't reject the altered stem cells.

Jennelle Stephenson: I don't know how to feel right now. I'm a little emotional. But I'm OK, it will grow back.

A few days after the chemotherapy, Jennelle received the infusion of genetically modified cells.

But the wait was a painful one. Not only for Jennelle, but also for her father Ray. Who did what little he could as the effects of the chemotherapy kicked in, stripping Jennelle's throat and stomach of their protective layers.

She was unable to speak for a week and lost 15 pounds. And because having a severely weakened immune system means even a mild cold can turn deadly, Jennelle had to stay in the hospital for nearly a month.

Last spring, she moved back to Florida and returned to the NIH for periodic check-ups.

Dr. John Tisdale: These are her red blood cells.

It didn't take long for Dr. Tisdale to notice something was happening.

Dr. Jon LaPook: This is Jennelle before any treatment?

Dr. John Tisdale: Right. All across her blood you can see these really abnormal shapes. This one in particular is shaped like a sickle.

Nine months later, this is what Dr. Tisdale saw: not a sickle cell in sight.

Dr. Jon LaPook: Was there ever a moment where you saw one of these normal-looking smears and thought, "Is this the right patient?"

Dr. John Tisdale: Oh, absolutely. When you're a scientist, you're skeptical all the time. So, first thing you do is look and make sure it's that patient, go grab another one, make sure it's the same. And we've done all that. And, indeed, her blood looks normal.

Remember, Jennelle used to struggle just to walk up a flight of stairs...

Jiu-Jitsu Teacher: And you fall.

...and a fall like this would have landed her in the hospital.

Jiu-Jitsu Teacher: Boom. Yeah. Good job. You did it. Bam.

Dr. Jon LaPook: I have to say, I was a little nervous when you were thrown and you went down on the mat.

Dr. Jon LaPook: Tell me about the adjustment that you need to make to go from the old you to the new you.

Jennelle Stephenson: My body it almost felt like it was, like, itching to do more. And I was like, "All right, well, let's go swimming today." "Let's go to the gym today." I'm like, all right, my body loves this. I kinda like it because my, I guess all my endorphins started pumping.

Dr. Jon LaPook: The endorphin high, something you had never experienced.

Dr. Jon LaPook: What was going through your head as you were watching Jennelle being thrown down to the mat?

Ray Stephenson: I was just saying, "Thank you, Lord. Thank you for medical science. And thank you for giving her a new life."

Eight other adults with sickle cell anemia have undergone the same gene therapy as Jennelle.  So far, all are responding well. Dr. Francis Collins says it will take years to improve the treatment to make it more widely available.

Dr. Francis Collins: Here's another dream. There are 7,000 genetic diseases for which we know the precise DNA misspelling. Couldn't this same strategy, this same set of principles work for lots of those, maybe someday all of them?

Dr. Jon LaPook: You've been working on this for decades. You're at a moment which is significant.

Dr. Francis Collins: To lead the Human Genome Project and to put that foundation in place. And now, to see that emerging not just as hoped-for advances, but real data showing cures for people.

Dr. Jon LaPook: You just used the "curing" word. You're willing to say that?