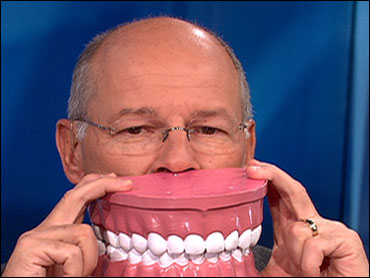 A beautiful smile is a good thing, but what's between your teeth may be much more important.

So, could flossing save your life?

She noted that some theories connecting the gums and heart focus on infections.

Another theory, she told co-anchor Harry Smith, says bacteria are at fault. Bacteria from the mouth, she said, enter the bloodstream and can attach to plaque in heart arteries.

Those developments, Ashton said, could in turn lead to cardiovascular disease, the leading killer of Americans, contributing to the deaths of around 2,400 people a day.

But there are ways to know if your gums are at risk. Signs of gum disease include bleeding, bad breath, abscesses, pockets, receding gums, and loose or separating teeth.

"It's very important to take care of our gums," Ashton said. "... People need to go (to the dentist) not just once a year, but two or three times a year, and have (him or her) check for these things."

But what if you think you have gum disease now?

Ashton said there are things you can do about it. She recommended tips by the American Dental Association. She said people should floss once a day, brush your teeth twice daily, visit the dentist, not smoke, and eat a balanced diet.