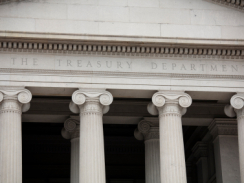 The White House is proposing to cut corporate income taxes from 35 percent to 28 percent. President Obama also recommends that manufacturers get a further cut, to 25 percent, and he wants to impose a minimum rate on foreign earnings to discourage the use of tax shelters. There would other less substantive changes as well under his plan.

The cut in the statutory tax rate, however, may not have as large an effect on the corporate sector as many anticipate. The reason is that this is intended as a revenue neutral change in taxes. To accomplish revenue neutrality, the cut in the tax rate will be accompanied be closing loopholes, i.e. a broadening of the base. Thus, every company receiving a tax break will be matched somewhere else by companies experiencing a tax increase. Thus, while some firms will benefit, others will get hit harder by these taxes and the net effect overall should be roughly a wash.

Another way you think about this, as noted by Jared Bernstein, is to consider the difference between the statutory tax rate -- the rate on the books -- and the effective tax rate, the rate after all deductions, loopholes, etc. have been exploited. The US has a relatively high statutory tax rate of 35 percent, but the effective tax rate is quite competitive with other country's rates (according to this estimate, it is 26 percent, about average for developed countries), The administration's plan would decrease the statutory tax rate, while at the same time increasing the effective rate for many firms by eliminating deductions and closing loopholes that allow firms to reduce their effective rates so far below the rate on the books. As Bernstein points out, these include "accelerated depreciation, interest deductibility, the ability to pass corporate capital gains over to the individual side of the code (where it gets favorable treatment), and a bunch of international loopholes, like deferral -- the ability to avoid U.S. taxation by holding multinational profits overseas."

Making the corporate tax system more equitable and more efficient is important, and this proposal takes steps in this direction, particularly on the equity front. Under current rules there is too much variation in the rates paid by companies that are very similar. However, since the proposal is revenue neutral, and is thus mainly a redistribution of the corporate tax burden rather than a cut in taxes, we shouldn't expect too much in terms of its ability to stimulate the corporate sector and the overall economy.