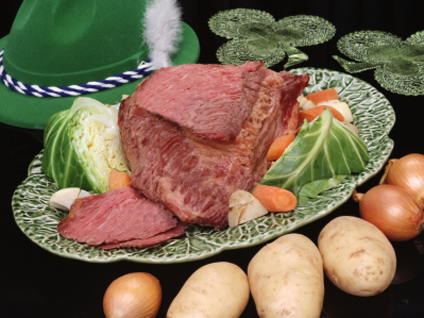 First thing's first: there's no corn involved. Secondly, it may not even be Irish! The traditional St. Patrick's Day meal of corned beef and cabbage may be closer to the hearts of Irish-Americans than the country they are celebrating.

Corned beef can be cured with brine or salt, but either way it comes from a cow. That was a bit of a problem for the Irish, who, back in the day, had lots of cheap pigs around.  As Salon.com aptly explains, bacon and cabbage was the staple dish for most Irish rather than beef. It was only when immigration brought a wave of newly Irish-Americans in the 19th century that corned beef hit the menu.

The theory goes that corned beef and cabbage became a popular lunchtime meal in New York City bars in the early 20th century. A letter republished in Salon explains, "It was a cheap meat, much cheaper than fresh pork, and cabbage was a cheap vegetable. The bars offered a 'free lunch' to the Irish construction workers who were building NYC."

Of course, nothing is free. The letter goes on, "You had to buy a couple beers or shots of whiskey (or both, if you wanted) to get that free lunch. And that's how corned beef became known as an 'Irish' food.'"

Explaining one Irish stereotype (corned beef) by using another (drinking) may seem suspect, but come March 17 there will be plenty of both. Even if it's not authentic, the spirit is in the right place, right?