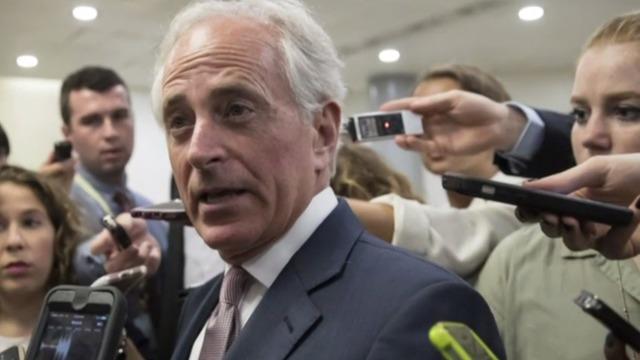 Sen. Bob Corker, R-Tennessee is firing back at President Trump yet again, saying that he'll be remembered for "the debasing of our nation," and he criticized the president's conduct at length as he spoke with reporters in the Capitol.

Mr. Trump, Corker has concluded, is not able to bring his conduct up to the level demanded by the presidency.

"I think that he's proven himself unable to rise to the occasion, and I think many of us, me included, have tried to, you know, intervene, and I have had a private dinner and have been with him on multiple occasions to try and create some kind of aspirational approach, if you will, to the way that he conducts himself. I don't think that that's possible. He's obviously not going to rise to the occasion as president," said Corker.

Asked if he regretted supporting Mr. Trump for president, Corker responded, " Let's just put it this way: I would not do that again."

Corker was also asked if Mr. Trump is a role model to children in the U.S. and Corker replied, "No, absolutely not."

"I think the things that are happening right now that are, that are harmful to our nation, whether it's the breaking down of we are going to be doing hearings on some of the things that he purposely is breaking down, relationships we have around the world that have been useful to our nation, but I think at the end of the day when his term is over, I think the debasing of our nation, the constant non-truth telling," Corker added.

Corker told reporters on the Hill that Mr. Trump's persistent name calling and "non-truths" affects young people the most.

"We have young people who for the first time are watching a president, stating, you know, absolute non-truths nonstop. Personalizing things in the way that he does. it's -- it's very sad for our nation."

Earlier on CBS, Corker said that "it appears to be the governing model of this White House to purposefully divide."

Mr. Trump took to Twitter shortly to respond directly to his comments, saying that Corker "who helped President O give us the bad Iran Deal & couldn't get elected dog catcher in Tennessee, is now fighting Tax Cuts."

Corker's comments came just hours after his interview with "CBS This Morning," when he urged the president to stay out of Republicans efforts to overhaul the nation's tax code.

"I think if Bob Corker is suggesting leaving it to the professionals, referring to himself, we left it to him long enough and he has been ineffective," said Sanders.

She added, "If Senator Corker doesn't want to be part of that, I think that is sad for his constituents. We'll not let that get in the way of us moving forward."

The ongoing feud between the lawmaker  and the president could make for a frosty lunch on Tuesday, since the president is slated to pay a visit to Republican senators during their lunch in an effort to push his tax blueprint.