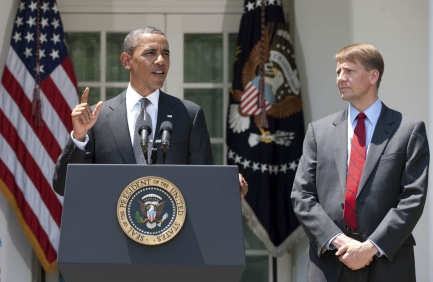 Cordray took the reins Elizabeth Warren, who hatched the idea for the CFPB back in 2007. Although it took a financial crisis to make her concept a reality, she was made assistant to the president and special advisor to the secretary of the Treasury for the CFPB in September 2010, charged with establishing the new regulator and recruiting staff. Warren was ultimately passed over as director, because she was widely viewed as not being able to win confirmation. She is currently running for Senate in Massachusetts.

Countless Wall Street lawyers have told me that CFPB is ridiculous, because it duplicates regulatory functions that already existed at the SEC, the Federal Reserve, the OCC and at various state agencies. While consumer protection has been part of these various organizations, there has never been one regulator solely dedicated to the needs of the consumer.

I interviewed Director Cordray to see what's been going on at the CFPB and to get a one-year anniversary progress report.

The CFPB set the bar high in its stated mission "to make markets for consumer financial products and services work for Americans." That's a tall order and one that covers a lot of ground. To carry out its mission, the CFPB is endowed with a lot of power to make rules, supervise and enforce federal consumer financial protection laws. This is of course what makes the lawyers nuts.

Cordray believes strongly that the CFPB must "create tools that empower consumers." AskCFPB does just that -- it's a database designed to help answer consumers' questions. Currently, the majority of the entries are focused on credit card and mortgage questions, but Cordray says the topics will be expanded.

Additionally, the CFPB launched the first-ever searchable database of individual complaints about financial products in its Consumer Complaint Database. I asked whether this is an invitation for the nut jobs to come out and wreak havoc. Cordray said the agency attempts to verify complaints and inappropriate comments are quickly removed.

The CFPB takes credit card, mortgage, student loan, bank account, and other consumer loan inquiries at its Consumer Response Center. These tools not only help consumers, according to Cordray, they help the CFPB understand what "consumers care about; what issues are affecting them" and they also help the agency prioritize which issues need the most attention. Responding to complaints and creating the database was the first major accomplishment for the CFPB.

The next major accomplishment: The CFPB's first enforcement action. The CFPB said Capital One marketed certain "add-ons" -- fee-based services added to credit card accounts -- in a way that violated federal law. As a result of the enforcement action, Capital One agreed to refund approximately $140 million to 2 million Capital One customers and to pay an additional $25 million penalty to the CFPB's penalty fund, which is used to either compensate victims or for consumer education and financial literacy programs. Cordray made clear that Capital One's marketing practices are "not unique to a single organization," so safe to say that there will be more actions against other card companies.

On the mortgage front, the CFPB launched Know Before You Owe for borrowers who are in the shopping phase of the mortgage process. Cordray says that this is an effort to streamline mortgage disclosures and "to make pricing and risks clear" so that consumers can compare apples to apples. Under the CFPB's proposal, new disclosure forms would be sent to borrowers three days before closing and the same forms would be used at the closing table.

With regard to CFPB limitations on high cost mortgages, the Wall Street Journal, among others, has taken issue with the new proposals, claiming "The rules that accompany the new forms reduce the power of consumers to choose the product that they want from the widest array of alternatives." Cordray's response was simple: "There is no question that the new mortgage initiatives create a better value in a more accessible format. These documents are tangibly better than what we had." Not only that, because housing and lending were the epicenter of the financial crisis, one of the few things that Congress agreed on was to put in place broad statutory requirements on mortgages.

Recent studies have found that 25 percent of credit reports contain errors that in some instances hurt consumers' ability to borrow, which is why the CFPB has jumped into the fray. The CFPB will begin supervising consumer reporting agencies with more than $7 million in annual receipts, which is an estimated 30 companies, which account for approximately 94 percent of the market's annual receipts. Given how important credit scoring has become, I was surprised when Cordray said that "This is the first time a federal agency will examine the operations, access to information and accuracy of the nation's largest credit reporting agencies." The CFPB will also analyze the process for resolving consumer errors.

To combat the growing problem of elder financial fraud and scams targeting the elderly, the CFPB established the Office of Older Americans. Cordray also noted that the agency is taking a hard look at how older Americans can protect themselves from being misled by less-than-meaningful designations, because there are unscrupulous people "peddling products to seniors, claiming to have credentials."

As student loan debt hovers at $1 trillion, the CFPB is focusing on how to help families manage the college financial aid and loan process. The Financial Aid Comparison Shopper (currently in beta version) can help students compare financial aid offers and pick the one that works best for them. Additionally, the Student Debt Repayment Assistant helps student loan borrowers learn more about their loan repayment options.

As if that were not enough, the CFPB plans to take up prepaid cards, overdraft fee practices, mandatory arbitration and reverse mortgages.

When I asked Cordray to name the toughest part of organization's first year, he said "the most notable challenge was how hard it is to build a new agency from scratch. It's like building a house...you know that it's going to be great, but there are so many decisions to make to get you there."

With the foundation laid, Cordray seems well on his way.