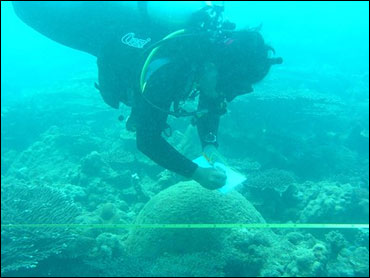 As ocean temperatures have risen 1 to 1.5 degrees, coral reefs have started dying around the world, and a new study suggests that they could be completely wiped out in a just a few decades.

On this Earth Day 2009, we continue our special series Planet Early with a look at this alarming situation going on below our oceans' surface.

Early Show weather anchor and features reporter Dave Price traveled to the Florida Keys to meet up with Dan Kipnis of the Florida Wildlife Federation to see the situation first hand.

Kipnis is an environmentalist who has been diving off the coast of the Florida Keys for over 30 years.

He said the Florida reefs, which make up one percent of fragile coral reefs on Earth, have changed dramatically since he began diving.

"I have been coming to this canal since 1965, and it was incredible, just amazing," Kipnis said. "We have lost our reefs. This is my passion and it's going away."

"We don't hear a lot about how coral reefs are dying and disappearing," Kipnis said. "You can't see it, out of sight out of mind, you can't see it."

Coral death is not just happening in Florida - the reefs in Jamaica's Montego Bay, the Indian Ocean, Indonesia, and in waters all over the world are suffering the same fate.

Price suited up and dove down to the ocean's floor to see the destruction for himself, calling the situation "remarkable." Once tall, colorful and brilliant corals and sea life are now destroyed, lying dead and broken on the bottom of the ocean.

The result is known as coral bleaching, which some scientists believe is a result of global warming.

"When you hear that the temperature has risen on to one and a half degrees in this water it doesn't seem like a lot," Price said. "But to all of this water covering all of the Earth means a massive difference to everything that is under this surface.

Twenty-five percent of the world's reefs are already gone, and as they continue to go, the impact could be devastating.

"Without the corals a lot of animals can't live, and without those animals the whole food chain breaks down and the whole cycle," Kipnis said, "the whole ecological cycle of the ocean collapses. If we lose the corals in the ocean, they are just like the forests, the ocean goes, we lose the oceans, mankind can not survive, we must have a healthy ocean for mankind to survive."

"Its a daunting problem - with clear life consequences that some of us will see in our lifetimes," Price said.

"My daughter is 25 years old and she isn't going to get to see this," Kipnis said. "If we keep doing what we're doing, she's not going to be able to see this."

Price asked Kipnis about the possibility his grandchildren seeing the reefs.

Kipnis responded, "Forget about it."

Combating Allergies In Your Own Home