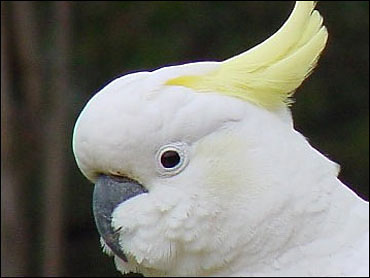 A Louisiana woman is accused of trading two young children in her care for a pet cockatoo and $175 cash from a couple who had been trying for years to have their own child, authorities said Thursday.

Donna Greenwell, 53, a long-haul trucker with an arrest record from Pitkin, is charged with aggravated kidnapping, along with would-be adoptive parents Paul J. Romero, 46, and Brandy Lynn Romero, 27, of Evangeline Parish.

"The Romeros had good intentions from what we see," said Keith Dupre, a detective with the Evangeline Parish Sheriff's Office. "They really wanted to take care of the kids. The kids were well-dressed and seemed to be treated good by the Romero family."

The transaction for the 5-year-old boy and the 4-year-old girl was negotiated by phone after Greenwell spotted a flier posted at a livestock barn selling a cockatoo for $1,500 and called the Romeros on Feb. 18, Dupre said.

Although Paul Romero had three children from a previous marriage, Dupre said, he and Brandy had tried unsuccessfully for years to have a child together.

When they told that to Greenwell, she allegedly offered to hand over the boy and girl for money. When the Romeros said they couldn't meet the price, Dupre said, "Ms. Greenwell agreed to make an even trade: the bird for the kids."

Greenwell showed up with the children at the Romeros' home the next day and said she would also need $175 for an attorney to complete adoption paperwork, Dupre said. But she had no authority to put the children up for adoption.

Everything began to unravel last week when authorities received a phone tip that the Romeros and the children would be at a local fast food restaurant, where authorities approached them. The children are in state custody.

Greenwell's relationship to the children was unclear. Dupre said the children's father, of Leesville, was being questioned and that authorities were looking for the mother, believed to be somewhere in Texas.

The Romeros were free on $5,000 bond. Greenwell - described as a long-haul trucker with an extensive arrest record including charges of kidnapping, assault and theft - remained in jail on $100,000 bond, Dupre said. She turned herself in on Sunday.

Police in Glenmora, near where Greenwell lives, are seeking information from anyone who might know if Greenwell has sold other children.

"She's had numerous children living with her at various times over the years," said Officer Jennifer Potter, who received the anonymous telephone tip that eventually led to the arrests.