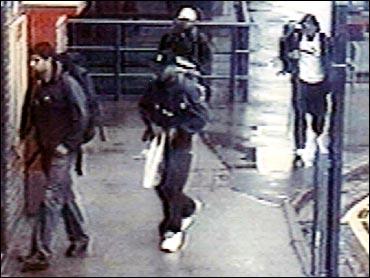 Police released closed-circuit TV footage on Tuesday showing three of the suspected London suicide bombers on what detectives believe was a reconnaissance trip less than two weeks before the deadly July 7 attacks.

"It's not unreasonable to speculate that what they were doing was some sort of reconnaissance for the attack which they knew they were going to launch on the 7th of July," said Peter Clarke, head of the police anti-terrorist branch.

The June 28 images show the three entering Luton train station north of the capital, arriving at London's King's Cross and entering the Underground train system. Detectives located the images after finding train tickets and receipts indicating the timing of the trip.

Police appealed for information from anyone who might have seen the men on their dry run and said they particularly wanted to know whether the suspects met anyone else while in London. Investigators have said they believe co-conspirators helped plan the attacks, but no one is in custody.

The trip followed the same route the suspects took on the day of the bombings that killed 52 victims and themselves, police said.

The visit "might suggest the suspects were carrying out reconnaissance of potential targets on the London transport system and checking the time of the journey they intended to take on the day of the attack," London's Metropolitan Police said.

"Other cases here and abroad have suggested that terrorists do visit possible targets as part of their planning, checking layouts, timings and security before carrying out attacks," police said.

Police said they also had footage showing the three at the Baker Street subway station, close to one of the bombing sites.

The men — Mohammad Sidique Khan, Shahzad Tanweer and Germaine Lindsay — spent about three hours in London and may have split up during that time, police said. Investigators said they were still searching closed circuit tapes for more information about what the suspects did in the city.

"We really need to know, did they meet anyone else? What else did they do during that time?" Clark said. "Those missing three hours could be vital."

The video did not show the fourth suspected bomber, Hasib Hussain, who allegedly blew up a red double-decker bus. He may have intended to attack a Northern Line train, but hit the bus instead because a mechanical problem had shut part of the line.

Assistant Police Commissioner Andy Hayman said police were searching about 80,000 closed circuit recordings as part of their investigation, which he called "a colossal undertaking."

Among the 15 sites detectives have searched is a landfill in West Yorkshire, where examinations are still going on, Clarke said.

Police said they had interviewed more than 3,000 witnesses, and seized nearly 30,000 items from the search locations, which included homes linked to the suspects in and near Leeds, northern England, where three of them lived.

More than 1,000 of the seized items came from a Leeds flat where police believe the bombs were made, they said. The search of that home took more than six weeks and ended only recently, the police said.

Some of the June 28 images bear eerie resemblances to closed circuit pictures released from the morning of the bombings, which also showed the suspects entering Luton station.

Three of them are believed to have driven there from Leeds the day of the attacks, met the fourth and then taken an early morning commuter train to King's Cross, a northern London transportation hub where they split up to target three subways and a bus.

Clarke said the evidence of a reconnaissance trip suggested the men were skilled.

"What this told us about these people is that this was carefully planned," he said. "This is quite typical of terrorists' methods ... to reconnoiter the layout, the timings, to check security, to check all those things that they would feel in their mind they needed to get right. That's what we think they were probably doing."

No one is in custody in connection with the attacks, although police have arrested the men they believe responsible for four attempted bombings on July 21, which took no lives but jarred Londoners' nerves.