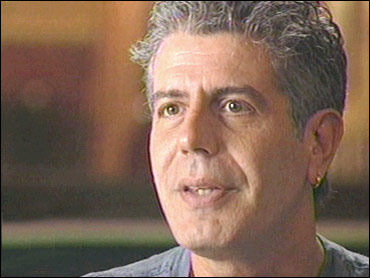 This report originally aired on September 30, 2007.

These days, the last place you're likely to find Anthony Bourdain is slaving over a hot stove in a restaurant kitchen. Now he spends his time hosting a TV show called "No Reservations."

Bourdain and a TV crew have been eating their way around the world for five years. The show takes them to some unusual places.

"I'm there to help out when one of our camera people gets a leech on her butt. I'm happy to step in," he told 60 Minutes correspondent Lesley Stahl. "I did not eat that leech, by the way, in case you were wondering."

But a leech is far from the worst thing he has put in his mouth. From a raw seal eyeball in Canada to guinea pig, high in the Peruvian Andes, Bourdain has sampled many unusual local dishes.

"The worst was with a tribe of bushman in Namibia we did for the show: warthog," he said. "There was sand, crap and fur in every bite."

But he rarely gets sick, thanks, he thinks, to a healthy immune system.

"It's happened a few times, but I think by not living in a hygienic bubble, I have a pretty good resistance," he said.

Bourdain's mother Gladys is a copy editor at The New York Times today, but when Bourdain was a boy, she was a stay-at-home mom in New Jersey, and an enthusiastic amateur chef.

"He would be curious. Come into the kitchen - we had a great kitchen - and he decorated the gingerbread men at Christmas as a kid," she said. "So he always had this interest in good taste, good smells. From a very young age, he loved to try new things. He ate snails that first summer in France, too."

That first summer in France, visiting his father's family, a 10-year-old Bourdain ate his first oyster, and his world was never the same.

"It was an early exposure to eating French that really resonated later," he said. "The power of those early experiences with a good oyster - in a very visceral way you remember those things."

He brings that adventurous attitude to his television show.

"Somebody once said, he saw me on TV, 'He's like some kid playing Look with his food,'" Bourdain said. "And I am, in a lot of ways, doing the same thing I was doing back then. I mean, there's an element of truth to that. I was the sort of kid who, if you dared me to eat something squishy, I'd eat it."

Bourdain says that daring to try anything once has worked well for him and not just at the dinner table. He has swum with piranha. He's skydived with Elvis impersonators, and nearly got crushed by a dune buggy.

"I mean, here I am, I'm 50 years old and I'm doing all of this silly, little boy stuff, and I grant you it's pretty undignified, but I'm having a really good time," he said.

His latest stunt, a martial arts fight, is up to even Jackie Chan's standards.

"The running-up-the-wall was pretty easy, the flying through the air while vertical, not so easy," he said, showing Stahl a clip from the show.

His mother says Bourdain was more than a handful as a teenager.

"For a long time I was very, very seriously fearful that he'd wind up in jail or dead," she said. "But, saving grace, despite all the wretched behavior he was home for dinner every night."

"I started enthusiastically taking drugs at around age 13. And liked them a lot," Bourdain said. "Anything I could - I took my first acid trip at 13 and for me that was an adventure."

At age 17 Bourdain got his first restaurant job: dishwashing, at a wedding reception.

He went to culinary school and learned to cook like Julia Child. He got a job in New York, but by then he had graduated to heroin.

"I liked the idea of doing the most dangerous drug in the room," he said.

He finally entered a detox program, but it took him six to eight years to come off the drug.

"It's pretty dreary," he said. "It's the least interesting thing about me. But, you know, there's only two TV movies of these stories, you know? And at the end of story, the guy OD's, or the end of the story the guy gets better. I got better. I buckled down. I became a working cook and did the best I could."

He did the best he could at a bistro called Les Halles, a little bit of France in lower Manhattan.

"I finally found the place I should have been working my whole life," he said.

He spent four intense years in this tiny kitchen, where he finally got his life in order. He was doing more than cooking. He was writing an expose about the restaurant business that was published as an article in 1999 in The New Yorker called "Don't Eat Before Reading This."

"They ran that piece and it became something of a notorious piece in the magazine, and suddenly everything changed," he said.

The article was expanded into a memoir, "Kitchen Confidential" which was on the bestseller list for 44 weeks and translated into 22 languages.

He has become most famous for this one piece of advice: Never eat fish on Monday.

"Those words are gonna be on my headstone, I think," he said. "When I wrote "Kitchen Confidential," I was perhaps looking to goose people outside the industry with what everybody in the industry knew: That the fish markets are closed on the weekend. All I can say is that at anything less than a really good restaurant, Monday's probably not your best day to eat fish."

Even still, he is backing off from some of the things he wrote in "Kitchen Confidential."

"When I wrote 'Kitchen Confidential' I hadn't been anywhere," Bourdain said. "I have since been all over the world. And I've since found that so many of the best meals of my life have been in absolutely filthy restaurants, with abominable bathrooms and pigs and chickens running around on the floor. So I do feel a little bad that I seemed to have scared a lot of people away from food rather than encouraging them to be more adventurous."

His passion for good food, and for how it can make the world a better place, was recently put to the test in Beirut, where he went to do a show about Lebanese cuisine.

"We start to hear automatic weapons fire a neighborhood away and a few seconds later, the cars with Hezbollah supporters drove by waving flags, celebrating the kidnapping of some Israeli soldiers," he said. "And the next thing you know, we found ourselves in a war and trapped in Beirut as the Israelis bombed the city. You know, we watched a country destroyed. Up to that point, I guess I'd begun to believe that everything could be okay in the world if we could all just sit down and eat together. I guess I'd come to think that. I'd allowed myself to become hopeful."

Beirut was a serious jolt. But now back in New York, he recently got a different kind of jolt when his daughter Arianne was born in April.

His having a baby surprised me incredibly," Bourdain's mother said. "Because he had always said he didn't want to be a hostage to fear. And that you have to worry so about children that he really didn't want it. But I think, frankly, that he'll be a fantastic father. Because under all the cynicism he has a mushy place that's very tender."

"For most of my life, I credit myself with being aware that I wouldn't have been a good father," he said. "At no point in my life was I a person who should've been responsible for a little life. Too selfish, too self involved. Too messed up on drugs, and also afraid. So that the thought of being frightened for a child, you know, I was not up to that kind of fear and responsibility. And I guess I just reached a point where, you know, I think I'm ready to have a baby.