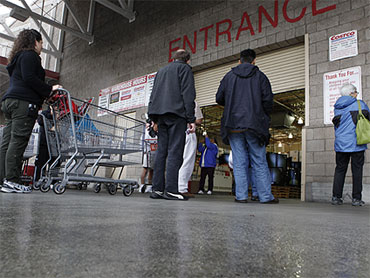 Consumers spent modestly last month, a sign that the economic recovery is proceeding at a decent - but not spectacular - pace.

The Commerce Department reported Monday that consumers boosted their spending by 0.3 percent in February. That was a tad slower than the 0.4 percent increase registered in January and marked the smallest increase since September. Still, the increase in spending was considered a respectable showing, especially given the snowstorms that slammed the East Coast and kept some people away from the malls. It marked the fifth straight month that consumer spending rose.

Incomes were flat in February, following a solid 0.3 percent gain in January. It marked the weakest showing since July, when incomes actually shrank. Income growth is the fuel for future spending. February's flat-line reading suggests shoppers will be cautious in the months ahead.

Spending growth in February matched economists' expectations. The reading on income was a bit weaker than forecast.

Both the spending and income figures in Monday's report point to a modest economic recovery.

Many analysts predict the economy slowed in the first three months of this year after logging a big growth spurt at the end of 2009.

The economy will expand at only a 2.5 percent to 3 percent pace in the first quarter of this year, analysts predict. That's roughly half the 5.6 percent pace seen in the final quarter of last year.

Unlike past recoveries, where consumer spending led the way, this one is hinging more on the spending of businesses and foreigners.

High unemployment, sluggish wage gains, hard-to-get credit and record-high home foreclosures are all expected to prevent consumers from going on a spending spree - one of the main reasons why the pace of the recovery will be more subdued than in the past.

Americans saved 3.1 percent of their disposable income, down from 3.4 percent in January. It was the lowest reading on the savings rate since October 2008.