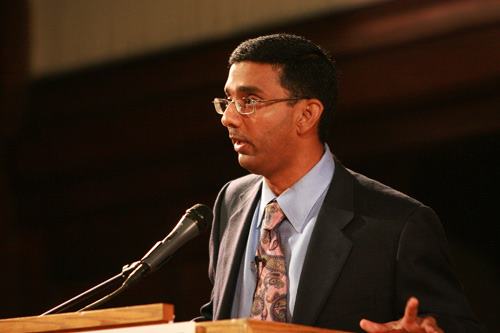 Federal prosecutors said Dinesh D'Souza, who made the anti-Obama documentary "2016: Obama's America," was scheduled to be arraigned Friday on charges he directed $20,000 in illegal contributions to be made in the New York Senate race in 2012. The candidate he supported was Wendy Long, who lost to Democratic incumbent Kirsten Gillibrand.

Prosecutors said he directed people to make the contributions to the campaign and then reimbursed them, which is a violation of election law that limits total contribution from one person to one candidate at $5,000.

Prosecutors said D'Souza, a San Diego resident, was charged with causing the illegal campaign contributions to be made and causing false statements to be made in connection with them. They said the criminal case resulted from a routine review by the FBI of campaign filings by various candidates after the Senate race.

He said, "It is important to note that the indictment does not allege a corrupt relationship between Mr. D'Souza and the candidate. There was never a corrupt agreement of any kind, nor was there any request made that the candidate take any action or refrain from taking any action as a candidate, or as a U.S. Senator if her political campaign were to have been successful."

In October 2012, D'Souza resigned as head of an evangelical college after becoming engaged to a woman while still married to his wife.

D'Souza resigned two days after the evangelical magazine WORLD reported he spoke at a Christian values conference in South Carolina and took along his fiancee, Denise Odie Joseph II. Organizers said they confronted D'Souza after concluding that he and Joseph had shared a hotel room while attending the gathering.

D'Souza denied staying in the same room as Joseph. He said he and his wife, Dixie, had been separated since 2010. D'Souza filed for divorce in California a few days after the South Carolina event, according to court records.

After the WORLD report, he called off his engagement.

D'Souza is a former policy analyst under President Ronald Reagan and a prolific author known most recently for his critical works on Obama. His film was condemned by many critics, but has become one of the most successful political documentaries ever released, grossing more than $32 million.