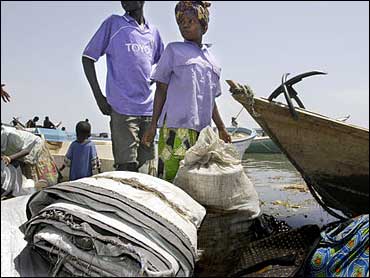 Tribal fighters armed with assault rifles and machetes patrolled the streets of an embattled northeastern Congo town Thursday as thousands of people fled their homes during a lull in fighting, a U.N. official said.

"It's a rare quiet day and I have been out on the streets where I saw 2,000 people walking on the road to the airport," said Patricia Tome, spokeswoman for the U.N. mission in Congo.

Gunmen from the rival Lendu and Hema tribes have been fighting for control of Bunia for more than a week. Scores of people have been killed and tens of thousands forced to flee their homes.

Congolese President Joseph Kabila and representatives of the tribal factions began talks Thursday to end the fighting. The talks were held in Dar es Salaam, the commercial capital of neighboring Tanzania.

Nsingi Zi Lubaki, Congo's acting ambassador to Tanzania, said more than 30 people, including U.N. officials and representatives from six or seven groups in Bunia, were attending the talks.

"The talks are at an early stage ... but there is optimism," said Mulegwa Zihindula, Kabila's spokesman. "Immediately after this we would like to see a cessation of hostilities."

Aid workers flying over Bunia on Wednesday saw "a massive column of people" streaming from the town to Beni, 100 miles to the southwest, said Gemma Swart, a spokeswoman of a British aid group, Oxfam.

U.N. officials have warned of a humanitarian disaster if the international community doesn't stop the fighting, and Secretary-General Kofi Annan is trying to persuade countries to contribute to an international security force to stabilize the region.

More than 10,000 people were sheltering in and around the U.N.-protected airport and the U.N. base in the town's center, where they have spent days without access to clean water and sanitary facilities.

On Wednesday, some 10 people were killed when a rocket-propelled grenade landed near the compound in Bunia, Tome said.

During the lull Thursday, aid workers struggled to install water supplies for residents camped at the U.N. premises, Tome said from Bunia, capital of the troubled Ituri district.

Bunia had a population of some 300,000 people, but thousands have left the town during months of insecurity, Tome said.

The latest fighting began May 7, a day after neighboring Uganda completed the withdrawal of its more than 6,000 soldiers from in and around Bunia.

Ugandans left the town in the hands of Lendu tribal fighters, a small contingent of U.N. troops from Uruguay and an even smaller Congolese police force.

The police and the U.N. troops have been unable to stem the violence and looting, and a civil administration set up to run Bunia after the Ugandan withdrawal has collapsed.