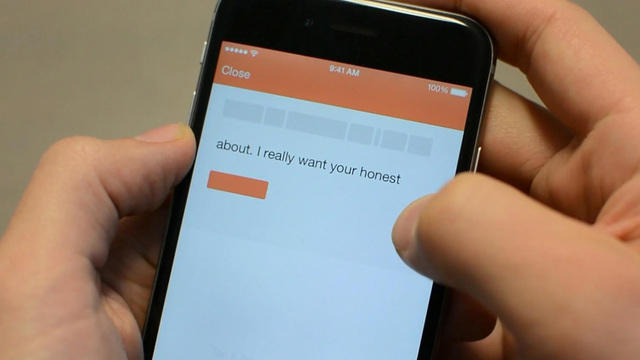 Apps like Confide are reportedly being used in Washington to leak embarrassing or sensitive information to journalists. Messages sent on Confide are automatically deleted, leaving virtually no paper trail. That makes it very appealing at a time when people are afraid not only of being hacked, but also being swept up in President Trump’s promised crackdown on leakers, reports CBS News correspondent Vladimir Duthiers.

Jon Brod didn’t set out to make a leaking app, but apparently, many people use Confide for that purpose.

“So I just received a new message which is... end-to-end encrypted,” Brod, the co-founder and president of Confide, explained. “You unveil the message by wanding over it with your finger.”

Brod said once messages are read, they vanish without a trace.

“The message is gone forever, it’s deleted from our servers, you can’t archive, print it, save it, cut-and-paste it. Again, just like the spoken word, it disappears,” Brod said.

You also can’t take a screenshot of the message.

“The message self-destructs so I can’t go back in and try to piece together a number of screenshots into the actual message, and it notifies both the sender and the recipient that a screenshot was attempted,” Brod said.

Features like that are attractive to officials who don’t want to be outed as leakers. It also means not having to use unsecure private email accounts.

“Any newsworthy hack, leak, vulnerability of digital communication leads to a corresponding spike in our usage and engagement metrics,” Brod said. “You can’t hack or leak something that no longer exists.

On Thursday, the president vowed to prosecute leakers.

“We are looking into that very seriously. It’s a criminal act,” Mr. Trump said.

It’s not known if secure messaging apps, like Confide, Telegram and Signal, were used in recent leaks of classified information.

“They are likely violating the law if they are revealing that information through any means, whether it’s through an email or through a disappearing chat app,” said Carrie Cordero, a former national security lawyer at the Justice Department.

Cordero said Confide’s privacy features will not totally protect leakers, since it still requires them to register their identities.

“Sometimes these apps give users a false confidence that they will never be able to be traced,” Cordero said. “And although the communication in this particular app might disappear, that doesn’t mean that the user is necessarily not able to be traced in any way.

Brod said he wants all Confide users to act lawfully. That’s especially true, he said, for those who work in sectors like government, finance and medicine, where disclosure of sensitive information is highly regulated.