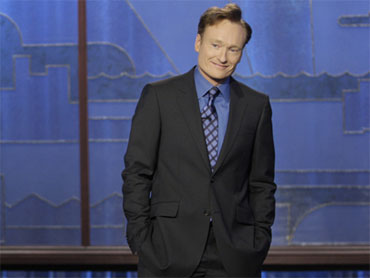 This week, she has 20,000 as well as a new iMac computer and offers to help pay for a dress and drinks for her wedding.

O'Brien decided last week to pick Killen as the only person he would follow on Twitter, turning the 19-year-old's life upside down.

The deposed "Tonight Show" star whose exit deal with NBC barred him from TV appearances for several months, has taken to Twitter to reach the masses during his exile and has amassed more than a half-million followers.

But up until Friday, O'Brien had steadily increased his number of Twitter devotees without following the feeds of anybody else.

Enter Killen, who is finishing up her high school requirements, preparing to make the jump to college and getting married in September.

"I've decided to follow someone at random," O'Brien's posting read at 3:55 p.m. on Friday. "She likes peanut butter and gummy dinosaurs. Sarah Killen, your life is about to change."

Boy, did it ever.

Immediately after O'Brien started following her, Killen - whose Twitter handle is "LovelyButton" - picked up followers at a rate of 150 per minute.

Then came the calls: Family, friends (actual and long-lost) and interview requests from Web sites, TV shows and radio stations.

She sleeps a few hours each night, has fallen woefully behind on her schoolwork and day-to-day activities such as laundry and rarely leaves the house.

"It's totally nuts," she said.

Until O'Brien plucked Killen from obscurity and turned her into an overnight Web celeb, she and fiance John Slowik Jr. lived a normal life, residing in the basement of a house in Conway Township, more than an hour's drive west from Detroit.

It's hard to say exactly what O'Brien's motivation was - a message seeking comment was left with an O'Brien spokeswoman on Wednesday - but it's had a profound effect on Killen and her 21-year-old fiance.

The exposure has resulted in a brand-new iMac, which was bought for them by a Florida businessman.

A New York designer is donating a wedding dress, and someone else is sending wine for the nuptials.

Not bad for a couple who saved $30 for the wedding, hadn't reserved a location and faced the prospect of not being able to afford a wedding dress.

"People are saying that I'm asking for gifts and stuff, and I'm not," Killen said.

What she is asking of her newfound army of Twitter followers is to contribute to charity, including the Susan G. Komen Race for the Cure.

Still, Slowik says he'd love one more thing from the man who used to make them laugh nightly during his abbreviated "Tonight Show" run.

Slowik wants O'Brien to be his best man at the wedding.

Will he do it?

"I would hope so," Killen said.
By Mike Householder