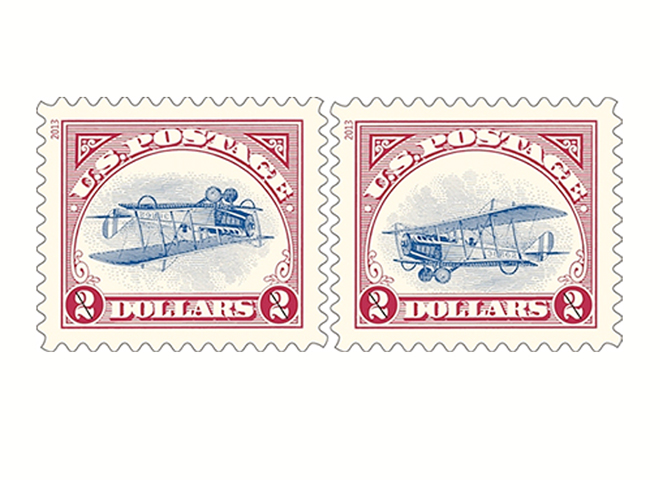 David B. Robinson, a certified public accountant and canal tour boat captain in Richmond, Va., is also a life-long philatelist. After recent news from the U.S. Postal Service, Robinson penned this editorial, expressing how he would like to put his stamp on the way the Postal Service promotes his hobby:

For collectors of American stamps, the pinnacle of a collection would be to own an Inverted Jenny -- a 1918 stamp with the Curtiss JN-4 airplane (known as the "Jenny") misprinted upside-down. Only a hundred originally made their way to collectors, and they are worth a fortune today.

In September 2013, the United States Postal Service commemorated this famous innocent error with the release of sheets containing six $2 Jenny stamps. This time the plane would be printed upside-down, except for 100 sheets purposely printed to feature the plane right side up -- an instant, intentional modern rarity!

As a life-long stamp collector, I decided to find one. Relying on the numbers put out by the Postal Service, I figured my "odds" of finding one of the new "right side up Jenny" sheets were 1 in 19,000. Going from post office to post office around Richmond, Va., I bought 3,080 sheets, at $12 each. The 2,758th sheet my wife, Gail, and I opened turned out to be a winner.

Ours was the 18th right-side-up Jenny sheet discovered, and last June it sold at auction for a total of $51,750 (including the buyer's premium). Yes, my wife and I had spent a lot of money to find the sheet, but we also had a lot of fun. Each night we sat down and opened ones I had purchased during the day; Gail likened our search to Charlie's search for a Golden Ticket in the movie "Willy Wonka and the Chocolate Factory." [We have a lot of two-dollar stamps left over that were not "winners."]

This month Linn's Stamp News reported the Postal Service made the irresponsible and thoughtless decision to mail at random one of the rare, right-side up Jenny sheets to three recent web and mail order customers for free -- what amounts to a $50,000+ gift.

Though the USPS has been careful not to call this a "sweepstakes," I think it just awarded three huge $50,000 prizes.

The Postal Service described to Linn's its decision to send out free Jenny sheets as "an innovative idea to raise awareness of the approximately 80 remaining right side up Jenny stamp sheets."

"Raise awareness"? Poppycock! This has been the biggest story in stamp collecting in years. Collectors have been searching for Jenny sheets using their own discovery plans within their own budgets. After spending almost $40,000 in my search for a right-side up Jenny sheet, I say, "Not fair!"

The Postal Service also admitted that its distribution plan was not properly vetted internally. We needed a fair and transparent marketing plan for this stamp from the beginning.

Since most of the $26 million face value of the Jenny stamps printed will be purchased by collectors, here's an idea: Get actual collectors much more involved in all aspects of the sales process, and put more of us on your Citizens' Stamp Advisory Committee. I volunteer!

To celebrate the Sept. 22, 2013, grand opening of the William H. Gross Gallery at the Smithsonian National Postal Museum and promote October as National Stamp Collecting Month, the Postal Service dedicated a new $2 version of the most publicized stamp error in U.S. history -- the 24-cent 1918 Curtiss Jenny Inverted airmail stamp. On Oct., 2, 2013, an announcement highlighted that some Jenny sheets depict the biplane flying "right side up."

Unique to this stamp issuance, all sheets were individually wrapped in a sealed envelope to recreate the excitement of finding an Inverted Jenny when opening the envelope and to avoid the possibility of discovering a corrected Jenny prior to purchase.

In an attempt to spark additional awareness of the approximately 80 remaining un-inverted Jenny stamp sheets, an employee in our stamp services department randomly mailed individual sheets as giveaways to three customers who had previously ordered the $12 stamp sheets either online, by phone or via mail order.

This promotional concept -- while well intentioned -- was not properly vetted within the organization and is inconsistent with legal constraints associated with distributing stamps free of charge. The Postal Service does not intend to conduct any such giveaways in the future.

We applaud Mr. Robinson's efforts for tracking down a "right side up" Jenny sheet and for his commitment to the world of stamp collecting. He is truly a remarkable individual. We also wish the best to the three individuals who received the stamps free of charge as well as others who have added these stamps to their collections.