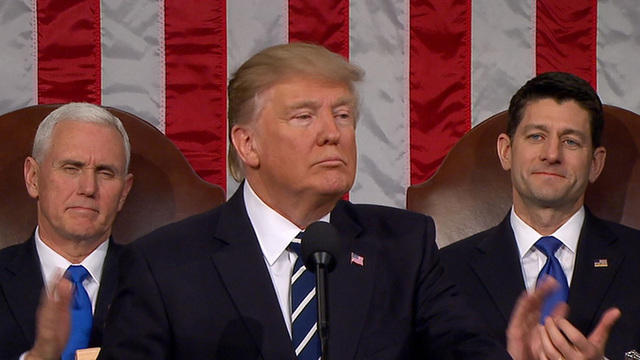 Every so often, we get one of these moments where he seems so jarringly normal.

President Trump’s speech on Tuesday was a success. The remarks were good and, on the Trump scale, delivered quite well.  It hit the notes he needed to hit. It was optimistic – not Trump’s usual speed, but one he now seems equipped to use.

But back to the “normal” thing. That’s been his critics’ big fear, that we would all get over the sheer weirdness of a President Trump, that we’d soon get used to it and accept. That our category for how presidents look, act, and speak would expand to include him.

Tonight, despite his sluggish approval ratings, that normalization process is well under way. Trump looked like a president Tuesday night, and that’s no small feat for anyone. It’s tough to get up on a stage like that and look like you should be there, no matter who you are.

If Trump could stay this way, in fact, it’s hard to think his approval ratings wouldn’t start to climb. He did not look like a president whose White House is a dysfunctional mess, even though it is. He did not behave like the vulgar, illiberal, orange-hued calamity the critics so loudly insist he is.

And that’s despite the fact that he didn’t compromise his nationalistic language. He just sounded like a sane nationalist, a guy who wants to do his best by the country and all the people in it. Starting off with a condemnation of hate crimes was smart. He sounded like a normal Republican on civil rights, like a Bush or a McCain. He did not sound like a normal Republican when, instead of talking about gutting social services, he promised to bring about paid family leave.

Yes, some of the lines were easy to mock, but that doesn’t alone mean they are bad lines.

“Everything that is broken in our country can be fixed, every problem can be solved,” is instantly meme-able but also a solid, optimistic piece of rhetoric. Same with “our children will grow up in a nation of miracles.” I’m confident that by Wednesday all the liberal pundits will be making fun of one or both, but by the standards of recent State of the Union addresses those sentiments are rather tame. Obama said he’d lower the oceans, Bush promised an end to tyranny in the world; presidents in this century say nutty things.

Let’s see how long Trump can keep this up, because we know him too well by now to think that he can really change, that he’ll always be doing it in his odd and sometimes off-putting way.

That was a speech that a president gives. And for now, his Twitter account has calmed down. Yes, he’ll never be “normal” in the traditional sense. There are eccentricities to him that will never go away. But like it or not, the normalization looks like it may well be happening.