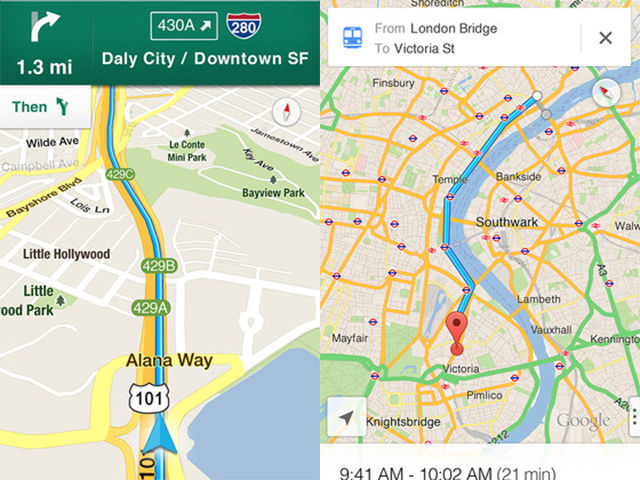 (MoneyWatch) Good news, everyone. After years in the desert, an oasis is upon us. At least, that's how people have been acting; Google has officially released a Google Maps app, restoring order to the universe after Apple replaced it with an inferior, home-grown alternative in iOS 6 and the new iPhone 5.

Google Maps isn't the same app that everyone knew (and loved) in older versions of the iPhone, though. Google has rewritten the app from the ground up, creating a streamlined, elegant app that leverages the same excellent mapping data we've known for years.

When you first start using Google Maps, you can easily specify a home and work address, which you can then navigate to with just a couple of taps. You can type or speak addresses to route to, and Google typically offers a few route alternatives. Tap the one you like best, and it'll start turn-by-turn, voice-guided navigation. You can also choose from among driving, transit, and walking directions. Google Maps also shows traffic conditions.

The maps are rendered simply and clearly, and there's little else on screen to clutter or confuse. You can switch to satellite data, and even tap through street view.

On the downside, Siri won't calculate directions for you with Google Maps -- it insists on using the built-in Apple Maps app. That's not the end of the world, though, since you can use the voice feature in Google Maps, which works about as well. And as Lifehacker recently pointed out, you actually can "hack" your iPhone to trick Siri into using Google Maps. But it's a lot of work for very little payoff (you can only navigate to pre-set destinations from your current location), so I wouldn't bother with it.

Should you install Google Maps? Absolutely. It's what Apple's Maps should have been -- simple, elegant, powerful and accurate. My advice is to take Apple's Maps app and bury it in a folder you never open, and put Google Maps on your home screen for easy access.