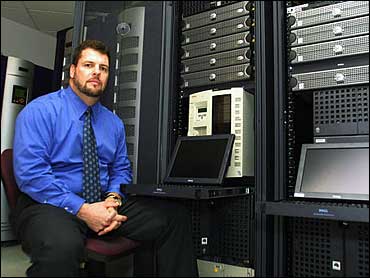 The U.S. government may soon be the owner of the world's largest collection of child pornography.

Once complete, the Child Victim Identification Program will allow law enforcers around the country to use advanced image-recognition software to compare digital pictures like an analyst matches fingerprints.

"The primary goal is to identify and rescue children who are currently being abused," said Mike Netherland, acting director of the Cyber Smuggling Center at the Bureau of Customs and Border Protection, which developed the system.

By matching newly found photographs against old ones seized around the globe, the system will be able to tell investigators whether an image is new, or has been circulating among pedophiles for years.

It also can tell whether an exploited child depicted in a photograph has ever been identified by a law enforcement agency or a missing children's group.

"When we see a picture that no one has ever seen before, that's a pretty good sign that we have a new victim we should be trying to find," Netherland said.

Investigators in several countries have contributed pictures to the system, as have the FBI, Secret Service, Postal Inspection Service and exploited-children groups.

The new catalog has been in development since 1999, but it only began to be deployed in January, Netherland said. It is expected to be in full swing within 90 days and will eventually include most of the illicit photographs in circulation on the Internet, he said.

The software that will mine the database works by examining the shapes and coloring of the images in any single photograph and determining if they match previously collected images. While it isn't accurate enough to identify individual faces, it can find photographs with identical shape patterns.

Similar matching systems already exist, but they are smaller and less sophisticated.

Efforts to build a central repository for pornographic images have drawn some concern about the potential for abuse by hackers or unscrupulous law enforcement agents.

Netherland said agents can't simply browse the system looking at photographs. Instead, the matching system will be largely automated and give limited access to pictures not directly involved in an investigation.

Agents also won't have direct access to the children's identities. If a match is found, the software will direct the investigating agent to contact the law enforcement agency that originally identified the child.

Michelle Collins, of the National Center for Missing and Exploited Children, said the system could prove invaluable to smaller police departments that don't have the manpower to identify victimized children on their own.

"If you are a local law enforcement officer in the middle of Iowa, and you haven't had a lot of child pornography cases, how would you know whether the children in these photographs are from your home town, or another country?" Collins said.

"But with these systems, and with the international cooperation we've been getting, it doesn't matter where a child lives. It could be anywhere, and if that child has previously been identified, we can make a match."

The effort has taken on extra importance after the Supreme Court last year voided a law making it a crime to depict children in sexual situations, even if the models used were actually over 18 or the pictures were realistic fakes.

"They want to be able to go into court and tell a jury, 'This is no fake,"' Collins said.

In a case this year in Philadelphia, investigators were able to trace the victims in two photographs sent by e-mail from a high school teacher to an FBI agent posing as a 12-year-old girl.

One was an American girl whose alleged abuser had previously been indicted and fled the country. The other was a girl from Manchester, England, whose stepfather was convicted of abuse and sentenced to 12 1/2 years in prison in 1998.

The teacher pleaded guilty on March 3.