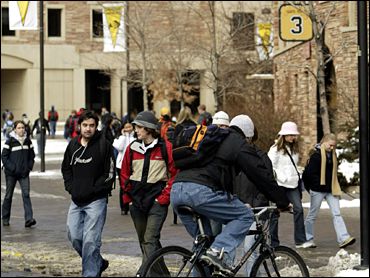 The University of Colorado football coach is expressing confidence he will keep his job, even as a new sex assault allegation surfaced.

Police said Thursday they are investigating whether a woman was raped by a University of Colorado football player after leaving a bar in 2002 — the seventh allegation of its kind to surface since 1997.

"This was a particularly brutal case," Boulder Police Chief Mark Beckner said. The alleged victim said she was sodomized.

The university football program is at the center of a scandal that may end up costing coach Gary Barnett his job. Three women have sued the school in federal court, saying they were raped by football athletes in 2001 and the university had done nothing after a high school student accused a player of rape in 1997.

In the past few weeks, three more cases have been disclosed. Former Colorado player Katie Hnida says she was raped by a teammate in 2000 and a one-time athletic department worker says she was assaulted by a player in 2001.

University President Elizabeth Hoffman placed Barnett on administrative leave for criticizing Hnida's on-field performance, telling reporters that Hnida was "not only a girl" but a "terrible" player.

Hoffman also said she was distressed by a remark attributed to Barnett in a 2001 police report that if another woman pursued rape charges against a player, Barnett "would back his player 100 percent."

Barnett, appearing on CNN's "Larry King Live" Thursday, said he expects to be reinstated despite rape allegations and reports of sex-and-alcohol parties, escort services and strippers surrounding the football program.

"I just know that the way that it's coming across nationally, I just don't think that's who I am," Barnett said.

Barnett has apologized for his comments, which he said were taken out of context and misinterpreted.

The coach could save his job if he proves the football program is not hostile to women, Hoffman told The Denver Post for Friday's editions. "We want to leave open the possibility that coach Barnett will still be our head coach," she said.

But the coach's suspension has not reduced pressure on the university, reports CBS affiliate KCNC reporter Rick Sallinger.

In the latest case, the woman told police she met two men at a bar the night of Aug. 23, 2002, but had trouble remembering what happened after leaving for her apartment. She told police "she may have been drugged."

The woman reported a bump on her forehead and bleeding from what she told police was a sexual assault.

One of the witnesses interviewed by police, a bartender, refused to disclose the names of two men in the bar that night.

"He said he would not risk getting them into trouble because, 'They're on scholarships, I can't do that to them,'" police said.

Beckner said the alleged victim had difficulty identifying a suspect, but authorities eventually focused on two football players. DNA tests ruled out one as a suspect.

"The DNA didn't match," Beckner said in a telephone interview. "We are going to resubmit the DNA of the second player."

He said tests had been delayed because of a backlog at the Colorado Bureau of Investigation, which has suffered major budget cuts, and because a court order was required to get the evidence.

The case has not yet been presented to the district attorney's office for review. Beckner said the woman wants the case prosecuted.

Responding to the latest report, Hoffman — the university president — told KUSA-TV in Denver, "The good news is that the police tell me that's all they have right now, which means we can digest that one more report."

Police chief Beckner said he was not surprised that more women have been coming forward to report sexual assaults since the federal lawsuits were filed against the university. Rape counselors say publicizing reports gives victims the courage to come forward.

"It does tend to snowball," Beckner said.

Hoffman placed Barnett on paid administrative leave Wednesday pending the outcome of the investigation into CU's recruiting practices and the rape allegations.

On the CBS News Early Show, Hoffman said Barnett's future would depend on "whether he was just angry and said very insensitive things or whether this is a pervasive aspect."

"Nothing has been proved. Nothing has ever been prosecuted," she said.

Former and current players voiced support Thursday for their coach.

"We believe coach Barnett is a man of high moral integrity," former quarterback Charles Johnson said. "We believe he is doing the right things. A balanced story is not being told."

Current Colorado quarterback Joel Klatt said there seemed to be a rush to judgment.

"I want to encourage everyone — the media and the public alike — to wait until the evidence is shown and the facts are out before anyone starts passing judgment on any parties involved," he said.

Asked on the Early Show if Barnett enforces the rules, Hoffman said: "I believe he does."

Barnett came to Colorado — where he had earlier been an assistant — in 1999 after seven seasons at Northwestern. Her earlier spent two years at Fort Lewis College. He has had winning seasons three of his five years at Colorado. His lifetime record is 77-84-2.

He earns about $700,000 a year from salary and income from advertising and sales.