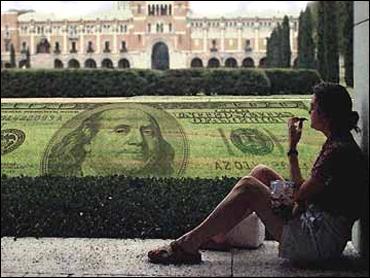 Despite a recovering economy and exasperation in Congress, college tuition will be up sharply again next year - though experts say that once financial aid is factored in, students may not be worse off.

Private institutions, which account for about half of American colleges and educate about 20 percent of four-year college students, will raise tuition on average 6 percent in 2004-2005 to just over $18,000, according to a survey released Thursday by the National Association of Independent Colleges and Universities.

Public colleges, only slowly emerging from years of state budget cuts, will probably charge about 10 percent more on average next year, or $5,100, estimated Travis Reindle, director of state policy analysis at the American Association of State Colleges and Universities.

The only good news for parents and students is that, like cruise lines and automobile dealers, colleges don't always charge the sticker price.

NAICU says 86 percent of students at private colleges pay less than full fare. Last year, when private colleges also increased tuition 6 percent, they increased financial aid for tuition and other expenses such as room and board by 15 percent.

"The net tuition is the thing to watch for - when the day is done how much money is the family actually paying," said David L. Warren, NAICU's president.

NAICU can't say for sure whether financial aid will make up for the increase again this year, but Warren said he expects net costs for students will hold steady or fall, as they have on average over the last decade.

At public colleges, where tuition rose 14 percent last year, students have been paying on average only about one-third of the sticker price in recent years, according to The College Board, which owns the SAT entrance exam. A recent USA Today analysis concluded that, including tax breaks and financial aid, average tuition paid at public universities fell by one-third to $1,115 over the last five years.

The American Association of Community Colleges also expects tuition increases next year, though it is still compiling figures. In 2003-2004, tuition rose on average about 12 percent to $1,560 annually.

Tuition does not include other college expenses, like room and board.

Warren, of the independent college group, attributed the latest tuition increases to another year of double-digit increases in expenses colleges can't control - such things as employee health insurance, utilities and library periodicals. Also, philanthropy has been flat, and endowments have yet to fully recoup their losses from the stock market downturn.

Anger over tuition inflation has caught the attention of lawmakers in Washington, where Congress is considering reauthorization of the Higher Education Act. Rep. Buck McKeon, R-Calif., recently proposed penalizing colleges for tuition increases. He withdrew the proposal in March, but pledged to reinstate it if the trend didn't slow.