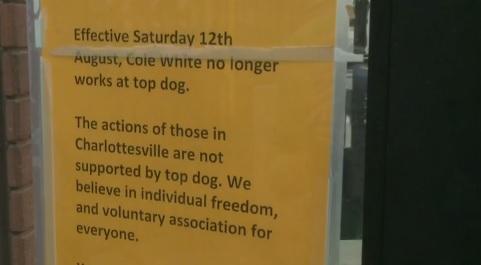 BERKELEY, Calif. -- A famed Berkeley hot dog stand has announced that an employee who attended a white nationalist rally in Charlottesville, Virginia, resigned from his job after he was outed on social media.

CBS San Francisco reports Top Dog posted a notice outside its building on Sunday saying Cole White, who was identified as a white supremacist demonstrator on Twitter, was no longer an employee.

"Effective Saturday 12th August, Cole White no longer works at Top Dog. The actions of those in Charlottesville are not supported by Top Dog. We believe in individual freedom and voluntary association for everyone," the poster read.

The owners of Top Dog, which has been in business since 1966, chose to make no other comment Saturday, leading to reports that White had been fired.

On Monday, Top Dog issued a statement saying, "We spoke with Cole White. During that conversation Cole chose to voluntarily resign his employment with Top Dog and we accepted his resignation."

"We pride ourselves on embracing and respecting all our differences and every individual's choice to do as that person wishes within the boundaries of the law," the company said. "We do respect our employees' right to their opinions. They are free to make their own choices, but must accept the responsibilities of those choices. Individual freedom and voluntary exchange are core to the philosophy of Top Dog."

Following the resignation, Berkeley police received information about a credible threat made against the business.

Police kept their eye on Top Dog's three locations overnight. Officers say they will be making extra patrols this week.

The aftermath of the Charlottesville protests has prompted a five-year-old Twitter page to expose white supremacists who gathered to protest the city's effort to remove a Robert E. Lee statue. The handle "Yes, You're Racist" not only names the demonstrators, but also shames them.

White was the first person who was exposed on Twitter.