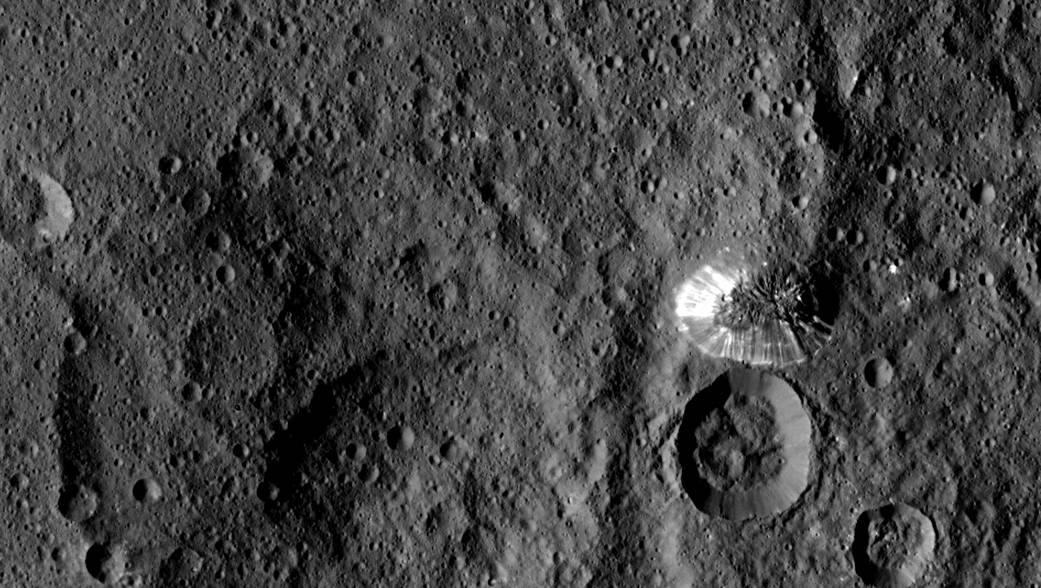 The terrain of dwarf planet Ceres comes into much clearer focus, but remains mysterious in the latest transmission from the Dawn spacecraft.

Closer pictures of the planet detail its tallest peak--four miles high, with "brightly-streaked slopes"--that NASA calls the lonely mountain. The new batch of images also shows more views of the large crater called Occator, along with its bright spots, and "narrow, braided fractures" along the surface of Ceres.

"The spacecraft's view is now three times as sharp as in its previous mapping orbit, revealing exciting new details of this intriguing dwarf planet," Marc Rayman, Dawn's chief engineer and mission director, based at NASA's Jet Propulsion Laboratory in Pasadena, California said in a statement.

The ever-curious bright spots in the planet's Occator crater remain unexplained, but the newest images show closer views of their luminescent quality.

But scientists don't yet know the origins of the color and texture variations on the surface of Ceres.

The pictures from Ceres that map its surface have a resolution of 450 feet per pixel, or one percent of the planet's surface area. Scientists can create 3D models of the planet from these images.

The Dawn spacecraft reached Ceres in March. It is now 915 miles above Ceres, orbiting 14 times every 11 days before it sends back a new batch of pictures. It will map Ceres six times before it comes in for a closer orbit of 230 miles above the surface in October.

Too many selfies? You may have "selfitis"
View CBS News In
CBS News App Open
Chrome Safari Continue
Be the first to know
Get browser notifications for breaking news, live events, and exclusive reporting.