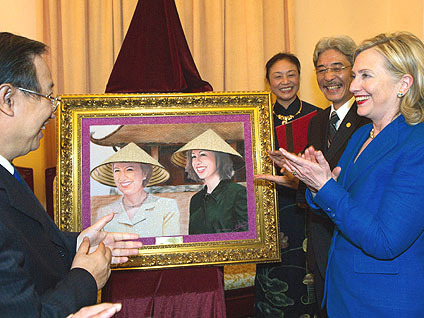 NEW YORK (CBS) Even when she's representing the U.S. in diplomatic circles abroad, Hillary Rodham Clinton is still the mother of the bride.

Secretary of State Clinton was given wedding presents for her daughter, Chelsea, by the government of Vietnam while on a four-nation tour for diplomatic meetings. Chelsea is to be married July 31 in the New York area.

According to USA Today, while in Hanoi, just over a week before the July 31 wedding, the mother-of-the-bride was given a white tablecloth for her daughter by government of Vietnam. Clinton was also given a gemstone mosaic portrait of her with Chelsea during their visit to the country in 2000.

Clinton was at the end of a four-nation tour that also took her to Afghanistan, Pakistan and South Korea. Even while travelling, she is helping to plan Chelsea's New York wedding.

USA Today reports that Clinton said that traveling while "trying to help organize my daughter's wedding is proof ... that I may be lacking in common sense."