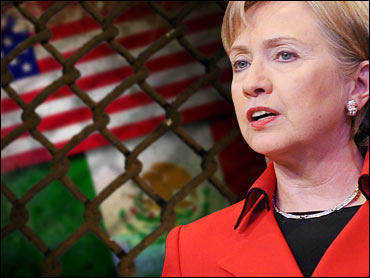 U.S. Secretary of State Hillary Rodham Clinton said Wednesday that America's "insatiable" demand for illegal drugs and its inability to stop weapons from being smuggled into Mexico are fueling an alarming spike in violence along the U.S.-Mexican border.

Clinton said the United States shares responsibility with Mexico for dealing with the violence and that the Obama administration will work with Mexican authorities to improve security on both sides of the border.

President Barack Obama himself said Tuesday that he wanted the U.S. to do more to prevent guns and cash from illicit drug sales from flowing across the border into Mexico. But Clinton's remarks appeared more forceful in recognizing the U.S. share of the blame. In the past, particularly under the Bush administration, Mexican official have complained that Washington never acknowledged the extent that the U.S. demand for drugs and weapons smuggling fuels the violence.

"I feel very strongly we have a co-responsibility," Clinton told reporters accompanying her to Mexico City a day after the Obama administration said it would send more money, technology and manpower to secure the Southwestern frontier and help Mexico battle the cartels.

"Our insatiable demand for illegal drugs fuels the drug trade," she said. "Our inability to prevent weapons from being illegally smuggled across the border to arm these criminals causes the deaths of police officers, soldiers and civilians."

"We want to address together the challenges that we are facing," Foreign Minister Patricia Espinosa said.

But Mexico says it will never allow U.S. troops to operate on their soil and the possibility the U.S. could deploy National Guard troops to the border is causing concern.

"It is seen as a very delicate issue," Espinosa told Logan.

Criminals are outgunning law enforcement officials, Clinton said, referring to guns and military-style equipment like night vision goggles and body armor that the cartels are smuggling into Mexico from the United States.

"Clearly, what we have been doing has not worked and it is unfair for our incapacity ... to be creating a situation where people are holding the Mexican government and people responsible," she said. "That's not right."

Clinton said she would repeat her acknowledgment as loudly and as often as needed during her two-day visit to Mexico City and the northern city of Monterrey during which she will brief Mexican officials on U.S. plans for the border and counter-narcotics aid to Mexico.

In her discussions, Clinton plans to stress Obama's commitment and encourage Mexican President Felipe Calderon and his top aides to boost efforts to combat rampant corruption by promoting police and judicial reform, according to senior U.S. officials.

President Calderon has been forced to deploy Mexico's army against ruthless narco traffickers and the network of corrupt police and officials supporting them, reports Logan.

Just hours before Clinton arrived, the Mexican army announced it had captured one of the country' most-wanted smugglers, a man accused of controlling the flow of drugs through Monterrey for the powerful Beltran-Leyva cartel. Clinton will visit Monterrey on Thursday.

The administration announced Tuesday that it would increase the number of immigrations and customs agents, drug agents and antigun-trafficking agents operating along the border. It will also send more U.S. officials to work inside Mexico.

However, on Wednesday several senators questioned whether the administration's plan can be successful without more money and people.

Those measures fall short of calls from some Southwestern states that troops be deployed to prevent further spillover of the violence, which has surged since Calderon stepped up his government's battle against the cartels.