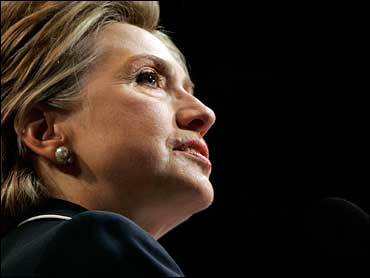 In a letter to supporters sent early Thursday morning, Clinton said she would host an event in Washington, DC, on Saturday to thank her backers and express her support for Barack Obama and Democratic Party unity.

"I have said throughout the campaign that I would strongly support Senator Obama if he were the Democratic Party's nominee, and I intend to deliver on that promise," Clinton said in the letter. "I will be speaking on Saturday about how together we can rally the party behind Senator Obama. The stakes are too high and the task before us too important to do otherwise."

CBS News learned earlier Wednesday that the former first lady had told House Democrats during a private conference call that she would give her support to Obama and congratulate him for gathering the necessary delegates to be the party's nominee.

Also in the speech, Clinton will urge once-warring Democrats to focus on the general election and defeating Republican presidential candidate John McCain.

One adviser said Clinton and her lieutenants had discussed various ways a presidential candidacy can end, including suspending the campaign to retain control of her convention delegates and sustain her visibility in an effort to promote her signature issue of health care.

The other options include freeing her delegates to back Obama and ending her candidacy unconditionally. The official stressed that neither Clinton nor her inner circle had decided specifically what course to take other than to recognize that the active state of her bid to become the first U.S. female president had ended.

On the telephone call with impatient House supporters, Clinton was urged to draw a close to the contentious campaign, or at least express support for Obama. Her decision to acquiesce caught many in the campaign by surprise and left the campaign scrambling to finalize the logistics and specifics behind her campaign departure.

"The quicker we proved that we were committed to Senator Obama, then the better for all of us," Rangel said Thursday on CBS News' The Early Show.

Rangel said Obama and Clinton need each other - it would help him pick up her supporters if she were on the Democratic ticket, and she "needs to maintain momentum" as a national and international leader.

They have already begun compiling information on potential running mates, but have disclosed no names.

Many of Clinton's supporters are pushing for Obama to pick her as his running mate. In an interview with CBS News anchor Katie Couric, Obama said he was going to go through a "deliberate process" and did not rule out choosing Clinton.

"Sen. Clinton would be on anybody's short list, obviously," he said. (See more of the interview.)

It was an inauspicious end for a candidacy that appeared indestructible when Sen. Clinton began 17 months ago.

Armed with celebrity, a prodigious fundraising Rolodex, a battle-tested campaign team and a popular two-term former president as a husband, many observers believed Clinton's victory in the Democratic nomination contest was a sure thing.

But in Obama, the New York senator faced an opponent who appeared perfectly suited to the time - a charismatic newcomer who opposed the Iraq war from the beginning and who offered voters a compelling message of change. Clinton voted for the legislation that authorized military force against Iraq. (Read "Five Reasons Obama Won" by CBSNews.com's Vaughn Ververs.)

After a disastrous showing in the leadoff Iowa caucuses Jan. 3, Clinton won New Hampshire's primary Jan. 8, setting off the state-by-state war of attrition with Obama that followed.

Her fortunes rose and fell like a fever chart: She was up in Nevada, down in South Carolina. Then, after a roughly even finish on Super Tuesday Feb. 5, she suffered a string of unanswered losses that, almost before Clinton noticed, put Obama so far ahead in the delegate hunt that all the big-state victories she piled up couldn't close the delegate gap.

By March, her options limited, Clinton adopted the persona of a tenacious fighter for the middle class, and powered successfully through primaries in states like Ohio, Pennsylvania, Indiana, West Virginia and Kentucky, showing grit that earned her valuable political currency.

White men, blue-collar workers, socially conservative Democrats and older women were especially receptive to her message, and her strong showing with those voters exposed Obama's vulnerabilities among those groups.

Democrats whose No. 1 concern had been ending the Iraq war at the campaign's outset, started worrying more about the economy. That was a switch from Obama's strength to hers.