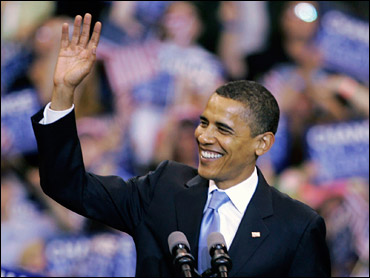 "Inevitable" was a word commonly associated with Hillary Clinton when she launched her presidential candidacy in January of 2007. That title now belongs to Barack Obama. On Tuesday night, the first-term Illinois Senator laid claim to the title of "presumptive nominee" after a historic, hard-fought Democratic primary campaign that went down to the very last day.

Perhaps no candidate in recent memory has entered a presidential primary with the kinds of advantages Clinton held. The former First Lady who has spent six years carving out a political identity of her own had the kind of universal name recognition, institutional support, resources and fond memories of better times for her party that appeared insurmountable.

The reasons for victory in any campaign can be fundamental or marginal and in a race as close as this one, a whole host of elements, moments or changes in the weather could be pinpointed as deciding factors in Obama's victory. But a trip down memory lane and talks with some Democratic observers offer a look at five major reasons Clinton lost her inevitability to Obama.

The War In Iraq: When Hillary Clinton joined other Senate Democrats in voting to authorize the Bush administration to take military action in Iraq in 2002, it appeared like a political winner - particularly for anyone with presidential aspirations. In fact, of all the Democratic presidential candidates in 2008 who were in a position to cast a vote, only Rep. Dennis Kucinich voted against the authorization.

But as 2007 dawned and the campaign began, Iraq had become a major problem for Clinton. John Edwards, who had voted with Clinton on the war when he was still in the senate, made a public apology for doing so. Pressured to follow suit, Clinton parsed her way through a position that had become extremely unpopular among the base of voters who would energize the primary process. But she refused to flat-out apologize.

Enter Obama, who had already created a tremendous amount of buzz with his entry into the race. Alone among the contenders to challenge Clinton, Obama had been against the war from the beginning and he made sure that was a centerpiece of his campaign. It gave him two advantages over Edwards and others vying to be the anti-Clinton candidate - purity on the war (and thus the sentimental edge on the growing block of anti-war voters) and an entrée into his driving campaign theme of "change."

Change v. Experience: "People were looking for dramatic change, not just incremental change, and he tapped into that early," said Democratic strategist Steve Jarding. And in Obama they found it, in ways both big and small. Race was an obvious difference between the Illinois senator and all the candidates who had come before. His very newness combined with Kennedy-esque appeals to put real meat on the rhetoric.

Clinton took a very different approach, presenting herself as the experienced candidate. With eight years as First Lady and just entering her second term in the Senate, some wondered what experience she was claiming. "The irony of all that is that she's been in elected office less time than Barack Obama," said Democratic strategist Garry South. "There was a way of turning the change thing around on him, and they not only neglected to do it, they didn't understand how to do it."

Above that, Clinton was slow at responding even once it became clear that Obama's message was selling. One of the major turning points in the race came at the Iowa Democratic Party's annual Jefferson-Jackson fundraising dinner. Obama's speech went below the radar screen of most voters but electrified party activists in the state, signaling a challenge to Clinton that she never pivoted to meet.

Iowa And The Process: In the spring of 2007, a memo was circulated by Clinton's deputy campaign manager making the argument to skip the Iowa caucuses altogether and concentrate resources instead on states further down the calendar. The actual reasoning of the memo may have been flawed, but the primary recommendation was certainly solid in retrospect.

In the Democratic race, Iowa became ground zero early on. Every single candidate made that the primary focus of their strategy - Clinton, to score a knockout blow on the rest of the field early on, the rest to find a foothold to continue forward. That dynamic raised the stakes immeasurably and when Clinton finished third there to Obama and Edwards, it changed the dynamics of the entire campaign. "When she lost Iowa, everything got put on hold," said Jarding.

Not only was it a setback for Clinton, it was proof that Obama's candidacy was not just catching on, it was winning. Despite a comeback victory in New Hampshire, Clinton would go on to lose South Carolina and entered Super Tuesday - with more than 20 contests - in a weakened position. "Hillary Clinton did not take Barack Obama or anyone else seriously as a potential contender for the nomination," said South. "She made a whole series of serious strategic errors - including thinking it would all be over on February 5th. She had no game plan in place in case it didn't work out that way."

A failure to seriously contest small caucus states like Alaska and even Colorado left her vulnerable to second guessing and campaign shakeups heading into a crucial stretch that saw Obama reel off a series of wins from Maine to Wisconsin while accumulating a campaign war chest unrivaled in political history.

Cold, Hard, Cash: When all is said and accounted for, Hillary Clinton will have probably raised about $250 million for her presidential campaign, an eye-popping amount by any standard. But Obama has already neared the $300 million mark and appears to have almost unlimited potential should he decide to bypass federal funding for the general election.

As more evidence of Obama's appeal, the source of his seemingly bottomless wallet was not the big-money networks relied on by Clinton, but small donors harvested at almost no cost over the Internet. And it manifested itself in very tangible ways in the primary campaign. He established a truly national organization which will serve him well this fall, and he was able to spend $75 million on television advertising - more than all the Republican presidential candidates combined.

And it was spent at critical points. According to a study by TNS Media Intelligence/CMAG and the Wisconsin Advertising Project, Obama outspent Clinton by a three-to-one margin in that critical period in February when he was running up his delegate count. In the end, Obama's money advantage wasn't a deciding factor, but one that came into play at key points during the campaign and helped Obama build a delegate lead Clinton could not overcome.

Superdelegates: At one point in the campaign, Obama supporters feared the prospect of a Clinton victory gained through the endorsement of the party leaders, or superdelegates, despite his lead in the delegate count. As a practical matter, it became her final strategy once it became clear that she had no hopes of erasing Obama's delegate lead, despite huge wins in states like West Virginia and Kentucky. (The actual Democratic delegate allocation system is one more reason Obama was able to win, but that's a whole story unto itself.)

Clinton's argument, as anyone who's heard her speak over the past month knows, was two-fold: she was the better qualified and more electable candidate for the party, and she brought a constituency that Obama could not attract: white, lower-income and blue-collar workers in key swing states like Ohio and Pennsylvania.

That argument fell flat for a variety of reasons. One primary reason was simple - Obama's lead in the pledged delegate count. Without some driving reason to disqualify Obama late in the game, how could Democrats (many up for re-election themselves), risk alienating black voters (one of the most loyal constituencies of the party), and more importantly, the legions of young voters Obama has brought into the process.

For every argument, there is a counterargument. "The superdelegates weren't fooled by it," South said of Clinton's approach. "The notion that she was the only one of the two that could be the only viable nominee in the fall simply is not a sellable argument."