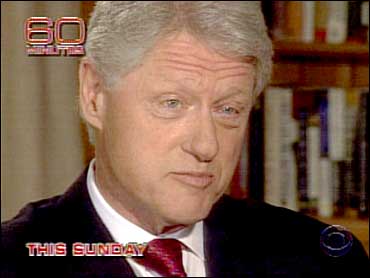 Bill Clinton says in his new autobiography that his wife, Hillary Rodham Clinton, looked as if he had punched her in the gut when he finally confessed to his affair with Monica Lewinsky. He spent at least two months sleeping on the couch after that, the Associated Press reports.

In "My Life," a copy of which was obtained by the AP, the former president said the affair with the White House intern revealed "the darkest part of my inner life." He said the sexual relationship was immoral and foolish.

Mr. Clinton said he came to learn that his upbringing had made certain things more difficult for him than for other people, and that he was particularly prone to self-destructive behavior when he was tired, angry or feeling alone.

The former president will discuss his upcoming memoir in an exclusive interview with Dan Rather to be broadcast on 60 Minutes, Sunday, June 20, 2004, at 7 p.m. ET/PT.

Earlier this week, Rather sat down with Mr. Clinton in his home in New York, and traveled with him through Arkansas last weekend, to conduct a wide-ranging interview covering his childhood, his life in politics, and the ups and downs of his presidency.

Mr. Clinton took on every question, including one about what he called his personal failure -- his affair with Monica Lewinsky.

Clinton: "I think I did something for the worst possible reason -- just because I could. I think that's the most , just about the most morally indefensible reason that anybody could have for doing anything. When you do something just because you could ... I've thought about it a lot. And there are lots of more sophisticated explanations, more complicated psychological explanations. But none of them are an excuse ... Only a fool does not look to explain his mistakes."

The affair's disclosure put him, Mr. Clinton says, "in the doghouse" with his wife and also threatened to alienate his daughter, Chelsea. The family was able to overcome its terrible effect through counseling, however.

Hillary, says Mr. Clinton, needed time with him to decide whether she would stay married to him.

"We'd take a day, a week, and we did – a whole day, a week, every week, for a year, maybe a little more – and did counseling," says Mr. Clinton. "We did it together. We did it individually. We did family work."

Mr. Clinton also tells Rather he is proud that he fought the impeachment battle that failed to drive him from office.

"I didn't quit. I never thought of resigning and I stood up to it and beat it back," he tells Rather.

"The whole battle was a badge of honor. I don't see it as a stain, because it was illegitimate," says Mr. Clinton of the impeachment process that he calls "an abuse of power."

Mr. Clinton views his economic plan as the greatest accomplishment of his presidency.

"I kept score, how many people's lives were better off," he tells Rather. "I think the fact that we were able to have 22 million jobs and record home ownership and lower interest rates … people actually had the ability to do more things than ever before."

He had many days as president that he counts among his best, including his efforts to help the residents of Kosovo and rid the world of a dictator. "The day that Kosovar war ended and I knew Milosevic's days were numbered was a great day. I had a lot of great days," he says.

Rather's interview with Mr. Clinton addresses all the important aspects of the former president's life. He speaks about the issues of his presidency, including the war on terror and Osama bin Laden and the Israeli-Palestinian conflict, regretting his failure to convince Yasser Arafat to accept a proposal he thought could finally bring peace.