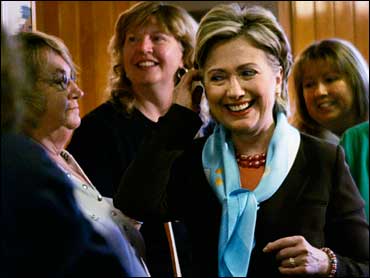 This column was written by James S. Robbins .

As the obituaries for the Hillary Clinton campaign rolled in last week, the candidate herself refused to be buried. She said that she would stay in the race "until there is a nominee." Most seemed to think that this meant that she would concede defeat if the Barack Obama campaign could assemble enough pledged delegates and super-delegates to pass the magic number of 2025 - or 2209 according to the Clinton campaign. But whatever the number, there will be no official nominee until the votes are cast at the party convention. What I heard in that statement was that Hillary was taking her fight to Denver.

Is this realistic? Most analysts are writing her off. But ask yourself: Does Hillary Clinton have as much gumption as Ted Kennedy did in 1980? Back then he went all the way to the convention, using many of the same arguments against Jimmy Carter that the Clinton campaign is currently employing, though he had a much weaker hand.

In late May 1980 the primaries were almost over. Ronald Reagan had recently clinched the GOP nomination, having gained the necessary delegates to force George H.W. Bush out of the race. President Carter, who had expected to be easily renominated, was facing a tough challenge by Senator Edward Kennedy, who was capitalizing on concerns of some Democrats that Carter, saddled with a poor economy and a series of foreign-policy disasters, would be unelectable in the fall. Kennedy had amassed a substantial number of delegates, but Carter was only 28 short of the 1,666 needed to nominate. The final eight primaries were to be held on "Super Tuesday" June 3, with the largest prize being California.

The Carter campaign maintained that Kennedy's hopeless challenge was damaging to party unity, and that he should drop out of the race. Kennedy in fact had offered to withdraw if the president agreed to a debate with the senator (which Carter had been ducking), and if he subsequently won most of the June 3 primaries. The Carter team rejected the idea, but it allowed Kennedy to claim he was acting in good faith and the best interests of the party. Two days before the final primaries Kennedy stated, "I am not prepared to withdraw from this race. I believe that it can be won - and that it must be won, for the good of our party and our country."

When the Super Tuesday results were in, Carter had won in Ohio, West Virginia,and Montana. It was, in his words, a "wondrous victory." He garnered 320 delegates, pushing his total to 1,958, well over the 1,666 needed to nominate, and over 700 more than Kennedy's 1,215. He offered "the hand of friendship" to the senator, whom he thought would acknowledge defeat, since the nomination was mathematically impossible at that point.

But Kennedy was not ready to concede. Quite the opposite. "The people have decided that this campaign must go on," he declared. "The people have decided that what counts is not the quantity of delegates, but the quality of their lives." Kennedy had won 53 percent of the total delegates at stake on Super Tuesday, taking California, New Jersey, Rhode Island, South Dakota, and New Mexico. It was his best night of the season.

Kennedy maintained that the president could not carry the larger states necessary to secure a win in November. Kennedy pointed to his own big-state successes - in addition to California and New Jersey, the senator had previously taken Michigan, Pennsylvania, and New York. Carter also faced crippling disenchantment within his party that would make post-convention unity difficult. Polling showed that while Carter won Ohio, 29 percent of that state's Democrats thought he was an "unacceptable" presidential candidate. In California, 41 percent of Democrats said they could not support Carter in the fall. "Tonight is the first night of the rest of the campaign," Sen. Kennedy said after the late California results came in. "Today, Democrats from coast to coast were unwilling to concede the nomination to Jimmy Carter, and neither am I."

But most Democrats were not Kennedy backers. He only had 36 percent of the total delegates, against Carter's 58 percent, and had amassed 38 percent of the popular vote in the primaries, against Carter's 51 percent. A Gallup Poll of Democrats May 16-18 showed Carter favored over Kennedy 60 percent to 30 percent, with 10 percent undecided. A Harris survey around the same time showed Carter preferred by Democrats 56 percent to 34 percent. By way of contrast, Hillary Clinton has 48 percent of delegates, 47 percent of the popular vote - which will probably increase - and current polling shows Clinton barely trailing Obama for support among Democrats nationwide.

The question of electability was muddled in 1980 by the mania for Republican splinter candidate John Anderson, who then was at the height of his popularity. A mid-May Harris poll showed Reagan at 39 percent, Carter at 33 percent and Anderson 23 percent. (Anderson drew 6.6 percent in November.) One poll showed that Secretary of State Edmund Muskie would be a more popular alternative to Carter than Kennedy, implying that the attraction was not so much to Kennedy as to the fact that he was not Carter. Muskie was polling even with Ronald Reagan at the time, while Carter was seven points down. This was during the short-lived "Draft Muskie" movement in June that was seen as a favorable alternative to a deadlocked convention. (These days "Draft Gore" is the functional equivalent.)

Kennedy kept his challenge going throughout the summer, even while admitting his campaign was seriously short on cash. The floor fight commenced in New York in August, Kennedy seeking rule changes to "free the delegates." Harold Ickes, now Sen. Clinton's chief delegate hunter, was one of Senator Kennedy's point men in the 1980 delegate fight. But the effort was in vain, and on August 12 Kennedy conceded, delivering the memorable lines, "For me, a few hours ago, this campaign came to an end. For all those whose cares have been our concern, the work goes on, the cause endures, the hope still lives, and the dream shall never die." Kennedy left the race, snubbed Carter on the dias, and the rest is history.

Comparing the 1980 contest to today's, Hillary Clinton has a far stronger rationale for her continued candidacy than Ted Kennedy, a much larger proportion of the delegates, a greater percentage of the popular vote, a much easier fight under the convention rules (because there were no super-delegates available to be persuaded in 1980), and substantially higher poll numbers among Democrats generally. Kennedy took his fight all the way to the convention floor with the intention of winning the nomination. There is no reason to believe the Clinton campaign will do anything less.