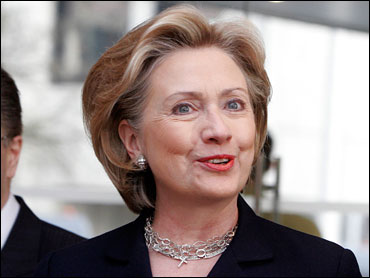 U.S. Secretary of State Hillary Rodham Clinton swiped hard at Iran on Wednesday, accusing its hardline leaders of fomenting divisions in the Arab world, promoting terrorism, posing threats to Israel and Europe, and seeking to "intimidate as far as they think their voice can reach."

Her remarks, at the conclusion of Israel and the West Bank, were notable for coming from an Obama administration that has raised the prospect of diplomatic engagement with Iran as part of a new direction in U.S. foreign policy.

In remarks to reporters aboard her plane en route from Ramallah to Brussels, Belgium, Clinton said that in her talks with Arab foreign ministers and other leaders she heard "over and over and over again" a deep-seated worry about threats posed by the Iranians.

"It is clear that Iran intends to interfere with the internal affairs of all of these people and try to continue their efforts to fund terrorism, whether it's Hezbollah or Hamas or other proxies," she said.

The sharp objections to Iranian behavior that Clinton enumerated are the same as those underlined by the Bush administration during its dealings with Tehran. The difference is that the Obama administration says it sees merit in pressing the Iranians to discuss the problems, even if talks fail or the Iranians refuse to engage.

In Tehran on Wednesday, Iran's supreme leader, Ayatollah Ali Khamenei, accused President Obama of following the same mistaken path as the Bush administration with his "unconditional" support of Israel. Khamenei also called Israel a "cancerous tumor" that is on the verge of collapse. He said Israeli leaders should be put on trial for its military offensive in Gaza, which ended with a shaky cease-fire in mid-January.

During her visit to Ramallah, Clinton met with the top leaders of the Palestinian Authority that administers the West Bank, President Mahmoud Abbas and Prime Minister Salam Fayyad. She then flew to Brussels for a NATO foreign ministers' meeting Thursday that is expected to focus on developing a new strategy for the war in Afghanistan and prospects for improving relations with Russia.

Clinton offered strong support for Abbas and for pushing hard to restart peace talks with Israel. Standing next to him, she told a news conference that the Palestinian Authority is the "only legitimate government of the Palestinian people."

Abbas has steadily lost support at home, particularly after a year of inconclusive peace talks with Israel. His Islamic militant Hamas rivals, who seized Gaza from him in 2007, are widely seen as emerging stronger from Israel's recent offensive against them.

In the in-flight interview, Clinton reiterated that Mr. Obama stands ready to engage in talks with Iran, with whom Washington severed diplomatic relations after Iran's Islamic revolution three decades ago. "But we want to make sure it's constructive," she said.

The main source of friction is Iran's nuclear program, which the United States and many in the international community believe is intended to produce weapons. The Iranians insist their program is designed solely for civilian energy production. The U.S. also is critical of Iran's efforts to spread its influence across the greater Middle East by supporting the militant Hezbollah group in Lebanon and Hamas in Gaza. The U.S. also has been critical of Iran's support of Shiite extremists in Iraq.

In Washington, British Prime Minister Gordon Brown echoed Clinton's remarks, again calling on Iran to suspend its nuclear program. In a formal address to Congress on Wednesday, Brown said the U.S. and Britain were ready for Tehran to rejoin the world community and to stop threatening peace.

Clinton offered perhaps her strongest criticism of Iran when asked about the administration's plans for building a missile defense system in Poland and the Czech Republic. The multibillion-dollar project was launched by the Bush administration and Mr. Obama is looking for ways of leveraging Russian opposition to the project to get more muscle behind efforts to halt Iran's nuclear program.

Clinton focused on the administration's assertion that the European missile defense system is not aimed at Russia but is necessary to deter Iran.

"Missiles not only with a nuclear warhead but a conventional warhead or some other chemical, biological weapon could very well be in the hands of a regime like Iran's, which we know will use whatever advantage they have to intimidate as far as they think their voice can reach, and who are actively pursuing a missile development program," she said.

On the other hand, Clinton seemed to suggest that the project in Europe is not entirely about Iran either.

"We have real potential threats, and obviously Iran is the name we put to them, but it is a kind of stand-in for the range of threats we foresee," she said.

Clinton was asked in the interview what she had heard from European officials in recent weeks about their willingness to resettle some of the Muslim detainees at the Guantanamo Bay, Cuba, prison for terror suspects, which Mr. Obama is planning to close this year.

"I'm very encouraged by what I've heard," she said. Without offering specifics or naming individual countries, she had received "positive, receptive responses" on the subject of assisting the Obama administration in disposing of detainee cases at Guantanamo.