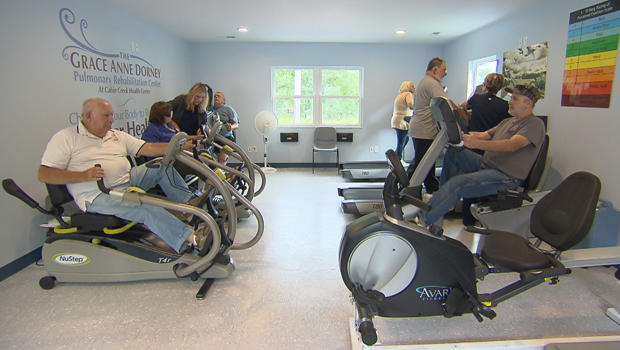 Just how common is COPD? And just how disheartening and confusing can a diagnosis be? These are questions our Senior Contributor Ted Koppel has been grappling with for very many years, and very close to home, as he'll be telling us in our Cover Story:

Everything I tell you this morning is factual, but I can't pretend to be objective …

I'd like you to meet my wife, Grace Anne.  No one in the world is closer to me.

If you squint a little … all right, more than a little … you may be able to imagine us as we were more than 50 years ago when we met as grad students out at Stanford.

And here we are, four kids and seven grandkids later.

Sixteen years ago, Grace Anne Dorney Koppel was diagnosed with very severe chronic obstructive pulmonary disease, or COPD, which is a basket of lung diseases, including emphysema, chronic bronchitis and some forms of asthma.  What they all have in common is that they make breathing difficult -- often very difficult indeed.

Still, some of those inhaler ads you see on television make COPD sound like more of a cuddly inconvenience:

Grandfather: "And the wolf was huffing and puffing …"
Child: "Kinda like you sometimes, grandpa!"

When Grace Anne got her diagnosis, it wasn't nearly that cute -- she referred to it as the worst day of her life up to that time. "I asked for the full prognosis.  And the response was, 'You have an irreversible disease. There is no cure.' I followed up with, 'Well, how long do I have?'  I was told maybe three to five years.

"It was like standing at the edge of a cliff, and actually you've begun to fall, and you don't know where the bottom is, because the disease is progressive. I couldn't know whether I had a year, or three years, or five years, but I knew -- I knew -- that this disease would kill me."

But 16 years later, she is still going strong.

Which is why raising public awareness, and reminding patients that COPD is treatable, has become something of a mission for Grace Anne, and for Ted.

Because this isn't a story about just one person; 16 million Americans have been diagnosed with COPD.  And it's estimated that another 10-15 million, who may be in earlier stages, also have it, but haven't been diagnosed yet.

Those facts -- and an active social conscience -- helped convince FCB Health, one of the country's largest ad agencies, to work with the Koppels (at no cost), crafting a campaign that will focus on some head-shaking realities, such as this:

"Just pennies per person per year to fight a disease that kills more Americans every year than all the Americans that died in Korea, Viet Nam, Iraq and Afghanistan combined."

"Well, I call it the Rodney Dangerfield of diseases," said Grace Anne, "because it don't get no respect."

Ted said, "One of the reasons it 'don't get no respect' is because, I think, a great many people say, 'Hey, you know, you smoked for most of your adult life.  It's your own damned fault.'  To which you say, what?"

Meet Elizabeth Duff, who goes by Liz, was born and raised in West Virginia. She has severe COPD.

She'd been smoking since she was 15. "And you just love it," Ted said.

Did the smoking cause her COPD? Almost certainly. But living in what has the reputation of being one of the most polluted valleys in the country didn't help, either.

"They used to call this Chemical Valley," said Liz. "You've got DuPOnt on one end and Carbide on the other. And the Kanawaha Valley was inundated with pollution. I mean, you could look out and see it hanging over the town, and I grew up in that."

No one's saying that smoking isn't the single greatest cause of COPD. It is, and quitting is absolutely the best thing you can do. But millions of people with COPD have never smoked a day in their lives. Pollution and work environment are also factors.

West Virginia is coal country. Thousands of those who worked at the mines, who spent years breathing in coal dust, developed their COPD by way of something called Black Lung Disease. Whatever the cause, West Virginia has more COPD patients per capita than any other state in the country.

The Koppels decided to set up a trial program in West Virginia. Pulmonary rehabilitation had vastly improved her life -- perhaps it could do the same for others where the need is greatest.

They found a number of local partners -- the Benedum Foundation; the United Mine Workers; and former U.S. Senator Jay Rockefeller and his wife, Sharon -- to help fund a pulmonary rehabilitation center at Cabin Creek Health Systems, in Dawes, West Virginia.  That was four years ago.  Since that time they've opened six others in West Virginia, and eleven centers overall.

Dr. Dan Doyle used to be a skeptic about pulmonary rehabilitation. Now, he runs the program at Cabin Creek, and is a fierce critic of medical colleagues who suggest that COPD patients have no hope:

"Telling people that there's nothing we can do, that you're gonna die in six months, that you have an incurable disease -- how is that helpful to people? You talked about being a healer of souls. How is that healing? It's not!"

Pulmonary rehab is not a cure, but it works.

One patient on a treadmill, who said she could barely walk when she started the program, told Koppel, "Now I can run. I'm wanna climb that mountain!"

"What we know for sure is, it allows people to live better, to be less short of breath, to have better quality of life on standardized measures," Dr. Doyle said. "And there is definite preliminary evidence that it reduces hospital readmissions, hospitalizations, and ER use."

"Well, they would be tingling if they didn't have earplugs in, or ear muffs on," Dr. Doyle replied. "I mean, why they're not paying attention to this is beyond me."

Craig Robinson, the executive director of Cabin Creek Health Systems, said, "From the reports that we get from patients, there is no doubt about what it has meant for people's lives. I mean, they'll often say, you know, 'I've got my life back as a result of this program.'"

Most of the patients in West Virginia can't afford to pay for their pulmonary rehab. So Cabin Creek largely depends on reimbursements from Medicare and Medicaid.

Still, Robinson said, the pulmonary rehab program is not breaking even. "Because the reimbursement rates are substantially lower than what it costs to provide the service."

"If you're not getting reimbursed sufficiently, can you keep that up indefinitely?" asked Koppel.

"No, and that's the sad thing. We put a lot of effort into trying to recover the costs as best we can using other sources."

Which brings us to the ultimate question of funding and finding a cure. Why does COPD, the number three killer of all Americans, rank 155th when it comes to funding research at the National Institutes of Health?

Koppel put that question to Dr. Gary Gibbons, the director of the National Heart, Lung and Blood Institute at the NIH: "There doesn't appear to be even a modicum of a rational relationship between 30 million Americans who have a disease, and the amount of money that is allocated toward finding a cure or a better treatment."

Koppel said, "You're saying if those people who have a hard time breathing to begin with just yelled a little louder, they would get more money?"

"Yeah, and I think it is also the people who love them, who are their neighbors, who are their representatives in Congress, who are their caretakers -- that they would lend their breath and voice to saying, 'This is an important thing that affects so many Americans.'"

Raising public awareness -- that's why the Koppels are pushing for a national campaign. As Ted notes, "The odds are, someone you know is struggling for breath. And they need your help."

Grace Anne Dorney Koppel got a lot of help, which is why she jokes that she's lived beyond her "use by" date. Still, even though they've been married for more than 50 years, some questions never get old.

She asked him, "Are you still prepared to love me until death do us part?"