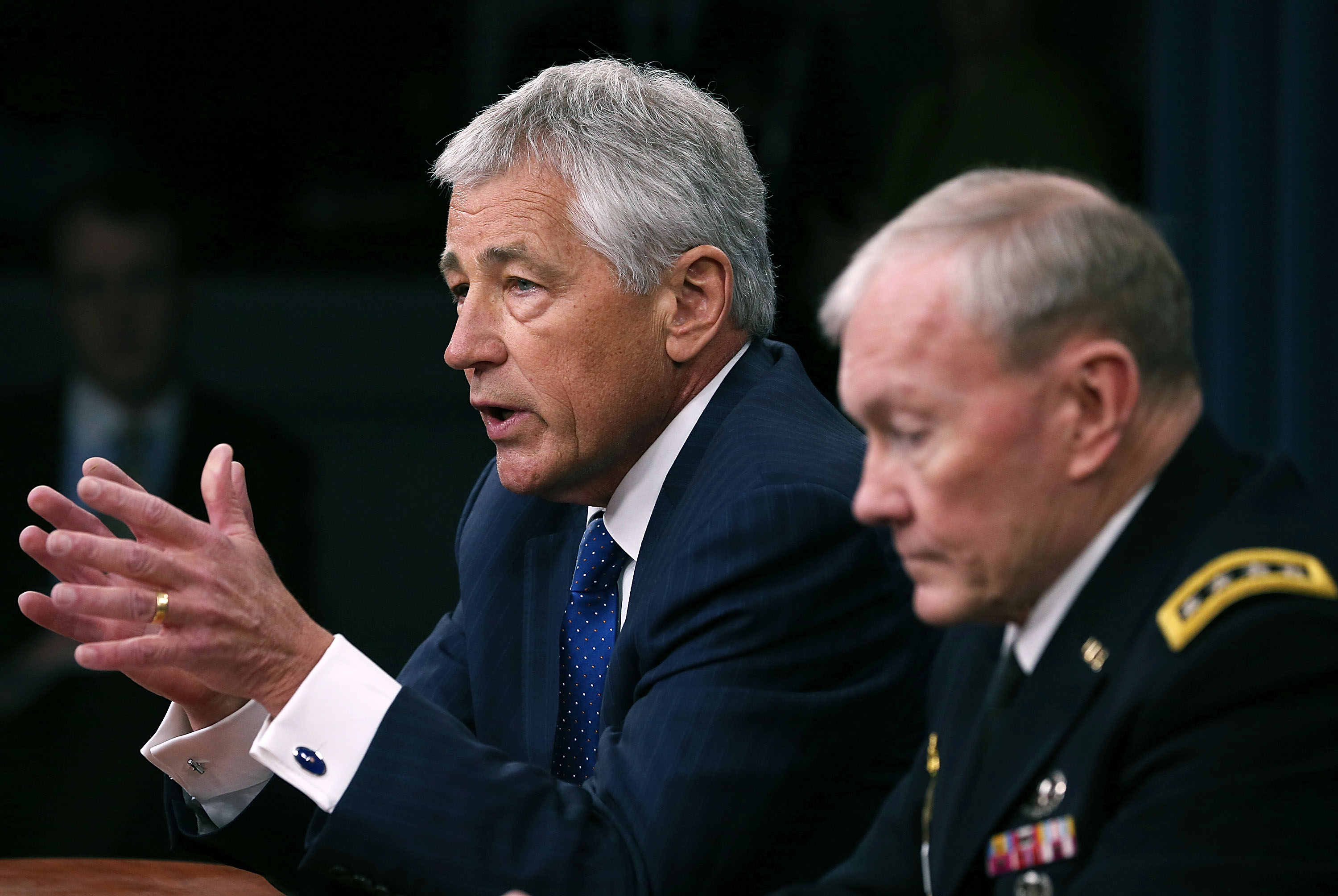 Hours after President Obama unveiled his 2014 budget plan, Defense Secretary Chuck Hagel revealed his plan for funding the Defense Department, citing tough economic "realities" that will lead to cuts and reductions - including a 0.7 percent shrink in raises for military service members.

Speaking alongside Joint Chiefs of Staff Martin Dempsey, Hagel outlined a budget with a base of $526.6 billion, which he said "continues to balance the compelling needs of supporting troops at war in Afghanistan, implementing the president's defense strategic guidance, and sustaining the quality of the all-volunteer force, all while ensuring we maximize the use of every taxpayer dollar and addresses internal imbalances within the Department of Defense budget."

But the newly minted defense secretary, who was sworn into office as the threat of sequestration loomed large over his department, acknowledged the ongoing demands for reduced defense spending, and the reductions and accommodations that has necessitated.

"The current fiscal environment has demanded that we take another look at these costs, which would represent $170.2 billion, or roughly one-third of the fiscal year 2014 budget request," Hagel said. "In this budget, the department is submitting a new package of military compensation proposals, including a modest slowing of the growth of military pay by implementing a 1 percent pay raise for servicemembers in 2014."

Hagel also announced cuts to TRICARE, the Defense Department's health care program. Those combined changes, he said, would save the department $1.4 billion in the 2014 fiscal year and $12.8 billion over the next five.

His budget, however, is contingent on the passage of an overarching federal budget plan that, like the one Mr. Obama presented today, alleviates many of the impacts of sequestration that are slated to impact the defense department. When asked about a backup plan, Hagel noted the "strategic choice and management review" he has ordered, which seeks to find ways to streamline and restructure the department in an effort to find more savings.

"That review is underway," he said. "We need to plan wisely for a long-term future of budget constraints, with thorough, clearheaded analysis that is anchored in the president's defense strategic guidance."

In the months leading up to the implementation of across-the-board budget cuts known as sequestration, the Defense Department officials from Hagel and Dempsey to Leon Panetta, the former defense secretary, have insisted that fully implementing the cuts would be devastating to U.S. military training and readiness. Hagel says his budget attempts to find common ground between the deficit-reducing cuts that many conservatives have demanded and a funding level that, according to Dempsey, "treats being the best-led, the best-trained, and the best-equipped military as the non-negotiable imperative."

"It invests in our priorities," Dempsey said today. "It keeps the force in balance. It supports our forward-deployed operations... Most importantly, it protects investment in what I've often described as our real decisive advantage, and that is our people."