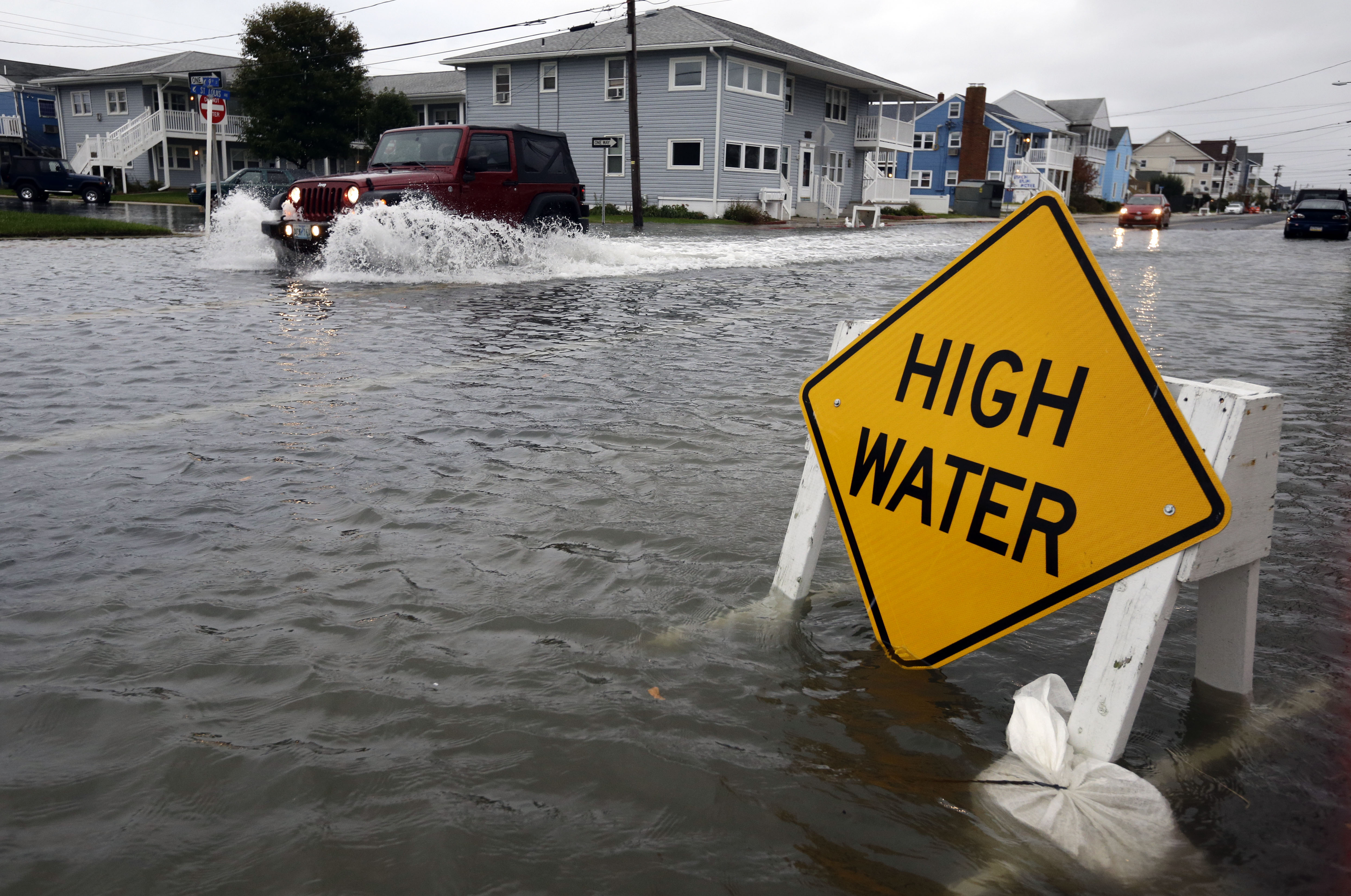 Big cities from Washington to Boston buttoned up on Sunday against the onslaught of a superstorm that could menace some 50 million people in the most heavily populated corridor in the nation, with forecasters warning New York could be in particular peril.

"The time for preparing and talking is about over," Federal Emergency Management Administrator Craig Fugate warned as Hurricane Sandy made its way up the Atlantic on a collision course with two other weather systems that could turn it into one of the most fearsome storms on record in the U.S. "People need to be acting now."

Airlines canceled more than 5,000 flights and Amtrak began suspending train service across the Northeast. New York and Philadelphia moved to shut down their subways, buses and trains Sunday night and announced that schools would be closed on Monday. Boston, Washington and Baltimore also called off school.

As rain from the leading edges of the hurricane began to fall over the Northeast, tens of thousands of people in coastal areas from Maryland to Connecticut were under orders to clear out Sunday. That included 50,000 in Delaware alone and 30,000 in Atlantic City, N.J., where the city's 12 casinos were forced by Gov. Chris Christie to shut down for only the fourth time in the 34-year history of legalized gambling there.

Sandy, a Category 1 hurricane with sustained winds of 75 mph as of Sunday afternoon, was blamed for 65 deaths in the Caribbean before it began churning up the Eastern Seaboard. It was expected to hook left toward the mid-Atlantic coast and come ashore late Monday or early Tuesday, most likely in New Jersey, colliding with a wintry storm moving in from the west and cold air streaming down from the Arctic.

Forecasters said the monster combination could bring close to a foot of rain, a potentially lethal storm surge and punishing winds extending hundreds of miles outward from the storm's center. It could also dump up to 2 feet of snow in Kentucky, North Carolina and West Virginia.

Louis Uccellini, environmental prediction chief for the National Oceanic and Atmospheric Administration, told The Associated Press that given Sandy's east-to-west track into New Jersey, the worst of the storm surge could be just to the north, in New York City, Long Island and northern New Jersey. By some estimates, the metropolitan area could get slammed with an 11-foot wall of water. CBS News correspondent Chip Reid reports from Ocean City, Md. that sea level could rise 8 feet above normal - enough to flood much of the city.

"Yes, this is the worst-case scenario," Uccellini said.

New York Mayor Michael Bloomberg warned people in low-lying areas of lower Manhattan and Queens to get out.

"If you don't evacuate, you are not only endangering your life, you are also endangering the lives of the first responders who are going in to rescue you," he said. "This is a serious and dangerous storm."

New York called off school Monday for the city's 1.1 million students and announced it would suspend all train, bus and subway service Sunday night because of the risk of flooding, shutting down a system on which more than 5 million riders a day depend.

The New York Stock Exchange planned to open for trading as usual Monday, despite fears that flooding could knock out the underground network of power, phone and high-speed Internet lines that are vital to the nation's financial capital.

Shelters across the region began taking in people.

The storm forced President Barack Obama and Mitt Romney to rearrange their campaign schedules in the crucial closing days of the presidential race. And early voting on Monday in Maryland was canceled.

"In times like this, one of the things that Americans do is we pull together and we help out one another," the president said in Washington. "And so, there may be elderly populations in your area. Check on your neighbor, check on your friend. Make sure that they are prepared. If we do, then we're going to get through this storm just fine."

According to the National Hurricane Center in Miami, at 5 p.m. ET on Sunday, Hurricane Sandy was at Category 1 strength, packing 75 mph winds, about 270 miles EAST-southeast of Cape Hatteras, N.C., and about 530 miles south-southeast of New York City, moving northeast at 15 mph.

At least twice as many train passengers as usual crowded the Amtrak waiting area Sunday morning at New York's Penn Station. Many were trying to leave New York earlier than planned.

The noon and 1 p.m. trains to Boston were sold out. Randall Ross, a bookseller from Shreveport, La., and his traveling companion, Mary McCombs, were waiting for an Amtrak train to Syracuse, the destination they chose after attempts to book flights through eight other cities failed.

"I just want to be somewhere else except New York City," said McCombs, who will stay with friends in Syracuse until she and Ross can get a flight. "I don't want to risk it."

Despite the dire warnings, some souls were refusing to budge.

Jonas Clark of Manchester Township, N.J. — right in the area where Sandy was projected to come ashore — stood outside a convenience store Sunday, calmly sipping a coffee and wondering why people were working themselves "into a tizzy."

"I've seen a lot of major storms in my time, and there's nothing you can do but take reasonable precautions and ride out things the best you can," said Clark, 73. "Nature's going to what it's going to do. It's great that there's so much information out there about what you can do to protect yourself and your home, but it all boils down basically to `use your common sense."'

"I'm real overwhelmed," she said as baby Zahiriah, wrapped in a pink blanket with embroidered elephants, slept in a car seat. "We're at it again. Last year we had to do it. This year we have to do it. And you have to be around all sorts of people — strangers. It's a bit much."

Mark Palazzolo was floored when a Facebook plea brought out 30 people Sunday — mostly strangers — to help fill sandbags to protect his bait and tackle shop in Point Pleasant Beach, N.J. One man drove more than two hours to pitch in.

"I think this one's going to do us in," said Palazzolo, who used the same wood he boarded up the store with in past storms, crossing out the names of hurricanes Isaac and Irene, and spray-painting "Sandy" next to them. "I got a call from a friend of mine from Florida last night who said, `Mark. Get out! If it's not the storm, it'll be the aftermath. People are going to be fighting in the streets over gasoline and food.'"