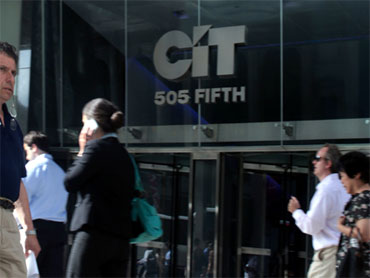 Struggling CIT Group Inc. has launched a debt restructuring effort it hopes will trim at least $5.7 billion from its balance sheet, but also is asking bondholders to approve a prepackaged reorganization plan in case it is forced to file for Chapter 11 bankruptcy protection.

New York-based CIT, one of the nation's largest lenders to small and midsize businesses, has been devastated by the downturn in the credit markets and is attempting to restructure its operations to remain in business. CIT received $2.3 billion in federal bailout aid last fall, a $3 billion emergency loan in July from some of its largest bondholders, and bought back $1 billion in debt but still needs to reduce its debt burden to survive.

The company said late Thursday that its restructuring plan has been approved by its board and by the steering committee of its bondholders. Under terms of the deal, bondholders would exchange their current notes for a portion of five series of newly issued secured notes, with maturities ranging from four to eight years, and/or newly issued preferred shares.

The exchange offers will expire just before midnight Oct. 29. However, for the out-of-court debt restructuring to be successful, CIT said at least $5.7 billion worth of debt must be able to be wiped off of its balance sheet.

Therefore, CIT also is asking most bondholders and other holders of CIT debt to approve a prepackaged reorganization plan so the company has the option of filing for and quickly exiting Chapter 11 bankruptcy protection in the event the debt swap doesn't achieve its goals.

"We believe this plan maximizes franchise value and can be executed quickly and effectively through a series of voluntary debt exchange offers or an expedited in-court restructuring process," said Chairman and CEO Jeffrey M. Peek, in a statement. "Upon completion of either alternative, CIT will be a well-funded bank holding company with a strong capital position and market-leading franchises."

CIT said it believes that a prepackaged reorganization could be resolved "expeditiously" with minimal disruption to its business. In this process, CIT Bank and other CIT operations would not file for Chapter 11, which would allow CIT to continue to service customers.

"We have the liquidity to serve our small business and middle market clients throughout this process," Peek added.

A CIT spokesman was not immediately able to be reached for comment on what the debt swap or prepackaged reorganization plan would mean in terms of recouping taxpayers' $2.3 billion investment.

CIT said it has been told by advisers to the steering committee that holders of about $10 billion worth of unsecured debt have already indicated they intend to participate in the debt swap or vote for the prepackaged bankruptcy plan.

"The committee has worked very constructively with the company and has approved its plan," said Jeff Werbalowsky of Houlihan Lokey, the financial adviser to the bondholders' steering committee. "Through the restructuring and substantial deleveraging featured in this plan, whether completed in or out of court, we are very confident that CIT will emerge as a strong bank holding company with renewed earnings and profitability potential."

The company has posted billions in losses as borrowing costs began to outpace the money it generates from lending to customers. Furthermore, as CIT's customers have struggled amid the recession, they have fallen behind on repaying loans. That has forced CIT to set aside more cash to cover those losses, a problem nearly all lenders have had during the recession.

Some experts have warned that a total collapse of CIT would deal a crippling blow to an economy still bleeding well over 100,000 jobs a month. The retail sector would be hit especially hard, since CIT serves as short-term financier to about 2,000 vendors that supply merchandise to 300,000 stores, according to the National Retail Federation. Analysts have said 60 percent of the apparel industry depends on CIT for financing.

CIT Group shares have followed the economy's downward spiral. The stock plunged during 2008 from $24 to about $4, and bottomed at 31 cents in July when it appeared CIT's collapse was imminent. Shares have been especially volatile in recent days amid continued uncertainty of the company's survival, bouncing as high as $2.20 on Tuesday and then dropping to close Thursday near $1 with hundreds of millions of shares changing hands.