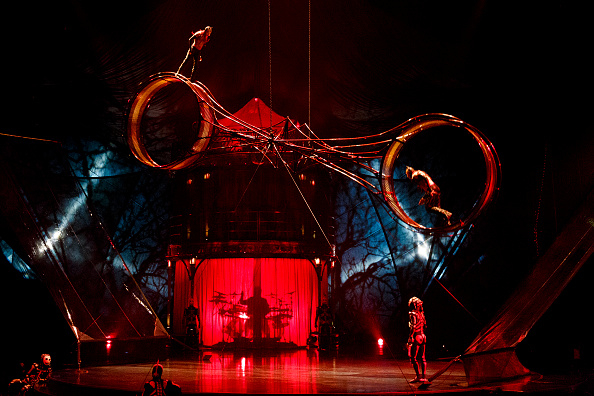 TORONTO - The founder of the Cirque Du Soleil said Monday he is giving up the majority stake in his circus troupe that has wowed audiences worldwide for 30 years and propelled him from street performer to billionaire.

What was once a small troupe of vagabonds has grown to a 4,000-person operation headquartered in Montreal that will now be controlled by the U.S. private equity firm TPG. Cirque founder Guy Laliberte told a news conference in Montreal that he has signed a deal to sell a majority stake to TPG for an undisclosed price. He will maintain a 10 percent stake in the business and continue to provide strategic and creative input to the company.

"I want to set other creative challenges for myself," said Laliberte, 55. Laliberte also said he didn't want to pass the business on to his five children, ages 7 to 18.

"They have their dreams and as a father I have made the commitment to support them as they chase them," he said. "I don't really believe in the idea of the second generation of entrepreneurs. From the outset, I didn't want to put the pressure of running the circus on their shoulders."

Cirque du Soleil is known for its cutting-edge shows that feature aerialists, acrobats and contortionists. It shuns the traditional use of animals and instead embraces acrobats, music and dance.

Laliberte started out as a street performer. Since he founded his own circus company in 1984 with $1.5 million in funding from Quebec's provincial government, Cirque has played to almost 160 million spectators in more than 330 cities in 48 countries. It has been one of Canada's major success stories in the business and entertainment worlds, employing more than 1,300 artists.

Laliberte dismissed any suggestions the Cirque is in financial difficulty, saying it is a profitable venture that sells 11 million tickets a year. He has credited the success of Cirque to the marriage of solid business sense and a passion for the surreal.

TPG is the world's largest casino owner with a stake in Caesar's Entertainment, while Fosun owns Club Med resorts. TPG said its experience building brands like J. Crew and Neiman Marcus, along with its strong media and entertainment relationships, will provide Cirque with new revenue opportunities.

The new owners plan to expand Cirque's presence in China. They also want to expand third-party licensing deals, digital media and ticket sales. The buyers have agreed to terms that will ensure Montreal remains Cirque's international creative and management headquarters.

The sale is expected to close in the third quarter.