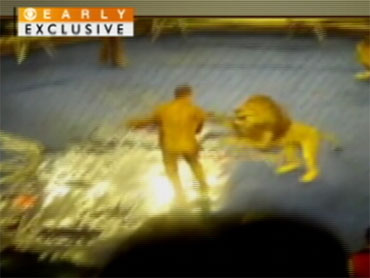 The countries of the former Soviet Union have a circus tradition that goes back at least 100 years and their performers are known around the world.

But on Saturday, a performance of one of those circuses went horribly wrong, and an American family got it all on video.

CBS News correspondent Betty Nguyen reported on "The Early Show" the city of Lviv in Ukraine is known as the "City of Lions," but a shocking new video gives that nickname a new meaning.

Doug Shepherd told CBS News via Skype, "Kids are screaming, and kids are only 10 feet away and (my family was) probably 35 feet away."

The video shows the lion roaring, lunging and striking, and another lion joins in, biting down on the trainer's left arm.

Circus workers quickly attempted to hose down the angry lions, separating them from their prey. The crowd, including Shepherd's own two children, scream in terror.

Masha Shepherd told CBS News, "I was just grabbing my daughter and trying to run because I thought that they were going to come out."

Nguyen reported the attack follows another dangerous incident a month ago at Las Vegas' MGM Grand Hotel, where a lion turned on its trainer. While that attack happened behind protective glass, what was most horrifying about this weekend's attack, a sheer net appears to be all that separates lions from the circus audience of roughly a thousand people -- many of them small children.

Doug Shepherd described the scene, saying, "You have a handler from outside poking through the net, and then there's one inside who almost gets eaten. But the lions are after the trainer."

Trainer Oleksie Pinko can be seen knocked to the ground as he desperately tries to herd the lions out of the ring. Pinko was taken by ambulance to a local hospital for emergency surgery. His current condition is stable.

Doug Shepherd said, "I've been to some great circus performances there. My son said, 'I don't want to go the circus ever again,' and I don't blame him."

Nguyen reported Shepherd's daughter left her doll at the circus arena. When he returned to retrieve it, he wasn't sure if he would see lions on the loose. Fortunately, they weren't, but he did see workers washing down the circus ring to remove traces of the attack.

Nguyen added the family was scared of a rumor that a lion had escaped the mesh ring and was on the loose. The rumors proved untrue.

To view Shepherd's footage, click on the full video below.