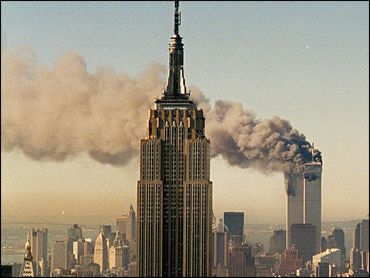 The federal commission reviewing the Sept. 11 attacks is examining whether the United States failed to aggressively track one of the hijackers after obtaining his first name and phone number more than two years before the attacks.

The tip, received in March 1999, appears to be one of the earliest signs that U.S. officials had about one of the 2001 hijackers. It also may have represented a missed chance for U.S. intelligence to uncover a terror cell in Germany that was a key element of the hijacking plot.

"The commission has been actively investigating the issue for some time," Philip Zelikow, executive director of the Sept. 11 commission, said Monday.

"I'm not going to comment on the progress of our investigation, but the Hamburg cell and what was known about the plotters" is an important part of the review, he said.

The New York Times, in its Tuesday editions, quoted German intelligence officials who said they had given the CIA the first name and telephone number of Marwan al-Shehhi, and asked U.S. officials to track him. The Germans said they never heard back from U.S. officials until after Sept. 11.

Al-Shehhi was a member of the al Qaeda cell in Hamburg, Germany, and a roommate of suspected Sept. 11 ringleader Mohammed Atta. Al-Shehhi was the hijacker who took the controls of United Airlines Flight 175, which flew into the south tower of the World Trade Center, while Atta took over American Airlines Flight 11, which crashed into the north tower.

A U.S. official told The Associated Press late Monday that thousands of full names of suspected terrorists come across the intelligence community's screens on a regular basis, making them hard to always track.

"A first name - and a common one at that - is a scrap of information and doesn't take you anywhere without the benefit of hindsight," the U.S. official said, speaking on condition of anonymity.

The Sept. 11 panel, formally the National Commission on Terrorist Attacks Upon the United States, was established by Congress to study the nation's preparedness before the attacks and its response. It also is to recommend ways to guard against similar disasters.

In its previous hearings, the commission has highlighted intelligence miscommunications and missteps about al Qaeda operatives dating back to the mid-1990s and hijackers who were allowed to enter the United States repeatedly despite lacking proper visa documentation.

The panel planned to meet Tuesday to discuss the status of its investigations, but the Hamburg tip was not on the agenda, Zelikow said.

The commission currently faces a May 27 deadline to finish its work, and has asked for at least a two-month extension, citing delays because of disputes with the administration over access to documents and witnesses.

Former New Jersey Gov. Thomas H. Kean, the commission's Republican chairman, has said the panel will be forced to pare down inquiries into intelligence failures if Congress doesn't act this week to give it more time.

The 1999 tip could reignite a debate over whether the Clinton administration or the Bush administration — or both — failed to take the al Qaeda threat seriously before the Sept. 11 attacks.

Published reports have suggested Mr. Clinton's team gave the incoming Bush personnel a detailed plan for attacking al Qaeda during transition talks in late 2000 and 2001. But the White House denies that.

That transition period is a main focus of the panel. But The Times has reported that some panel members and staffers have had to recuse themselves because they were involved in one or the other administration. Zelikow, for example, was an adviser on foreign policy to the team that oversaw the transition.

Commission member Jamie S. Gorelick was a deputy to Attorney General Janet Reno and so might have knowledge of the federal response to terrorism under Mr. Clinton; she has also recused herself from some discussions, as have other staff members and commissioners on certain issues.

The commission has said it wants to question Messrs. Clinton and Bush. Mr. Bush agreed, but last week the commission and White House disagreed over whether he must testify before the full panel or just a subgroup.