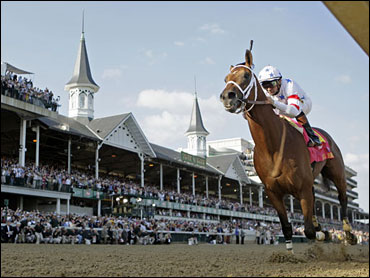 Churchill Downs President & CEO William C. Carstanjen took on the menial tasks of feeding and washing down horses and cleaning tracks when he took part Sunday night in an episode of "Undercover Boss."

In a episode that had the host of the Kentuicky Derby working at tracks the company owns in Florida and Illinois, viewers discovered that Carstanjen didn't know how to turn on a vacuum cleaner, can't play a bugle and hadn't been near a horse in 15 years.

Several employees, especially those who worked with animals, spoke about how their love for the work kept them at their jobs despite poor pay and one cleaning woman told him about the long commute she had to work at the track. His solutuon was to offer her a cleaning job at an OTB parlor closer to her home.