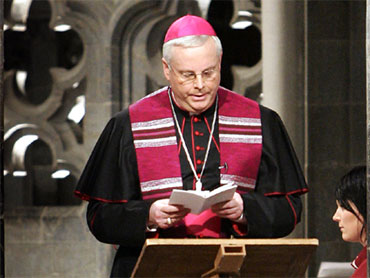 Norway's Catholic Church revealed Wednesday that a bishop who resigned last year did so after admitting he had molested a child years earlier, when he was a priest.

Georg Mueller stepped down as bishop in the western city of Trondheim in June 2009. The church said it had not previously disclosed the reason for his resignation at the request of the victim.

Mueller's successor, Bishop Bernt Eidsvig, said in a statement Wednesday that the 58-year-old German had been removed from all pastoral duties and undergone therapy after he admitted the abuse. Mueller admitted to only one case - before he became a bishop in 1997 - and no other allegations have come to light, church officials said.

"Mueller has been divested of his authority, and he won't be allowed to work in a church again," Eidsvig told Adresseavisen, the Trondheim daily newspaper that broke the story. "He will never again be given a position in the church."

Sex abuse allegations, as well as accusations of cover-ups by bishops and Vatican officials, have swept across Europe in recent weeks. The church in Norway had previously said it had investigated two separate claims of abuse from the 1950s.

Eidsvig did not give details on when Mueller committed the abuse, but said the victim is now "well over age." It's too late for the case to be tried in civil court because the statute of limitations in Norway has passed, Eidsvig said.

Vatican spokesman the Rev. Federico Lombardi said the abuse occurred at "the beginning of the 90s." Mueller was a diocesan priest in Trondheim before being ordained a bishop in 1997.

Eidsvig said he was making the case public at the request of Cardinal William Levada, who oversees the office that handles cases of alleged abuse by priests.

Eidsvig said The Vatican assigned the Apostolic Nunciature in Stockholm to investigate the allegations and whether they should be reported to civil authorities.

Monsignor Rolandas Makrickas, a spokesman for the nunciature, said he had nothing to add to the Norwegian statement "except confirming that it is true."

Adresseavisen said that, before Wednesday's admission, it had made repeated requests for details on Mueller's unexpected resignation, which the church explained at the time only in vague terms.

The paper reported that the church paid the victim between 400,000 and 500,000 kroner ($67,000-$84,000) in reparations. Andreas Dingstad, a spokesman for Norway's Catholic Church, told The Associated Press he didn't know whether the church had paid reparations.

Mueller, who first took up a post in Trondheim in 1981, quit his post on June 8, 2009, and relocated to Rome, according to the Web site of his order. The Web site said his resignation cited a section of canon law that allows a bishop to quit early if he is unable to carry out his duties for health or other reasons.

Church officials estimate there are more than 100,000 Catholics in Norway, a mostly Lutheran country of 4.9 million people.

In neighboring Denmark, also predominantly Lutheran, the Catholic Church launched an investigation this week into claims of clerical abuse dating back several decades. The panel is looking into 17 cases mostly dating to the 1960s and 70s.