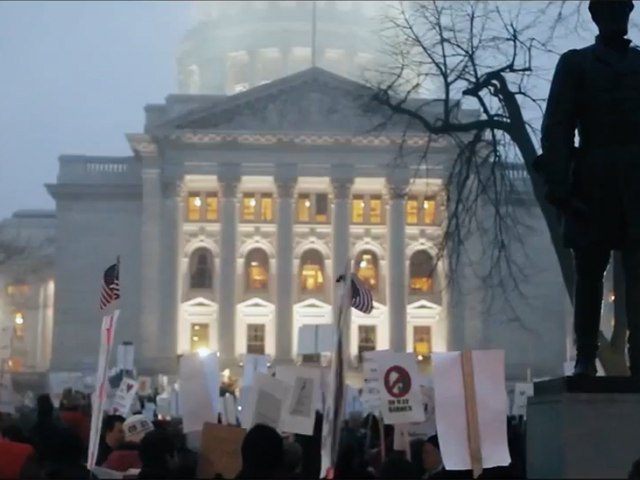 One of the most buzzworthy ads to air during the Super Bowl on Sunday night appeared tinged with a political message. Chrysler's two-minute commercial titled "It's Halftime in America" seems like it could have been drafted by President Obama's re-election team. Or it could perhaps give fuel to the Romney campaign, depending on how one looks at it.

The ad features as many images of American families, factory workers and downtrodden neighborhoods as it does Chrysler vehicles. In his trademark gravelly voice, Clint Eastwood narrates the ad:

"It's halftime. Both teams are in their locker room discussing what they can do to win this game in the second half. It's halftime in America, too. People are out of work and they're hurting. And they're all wondering what they're going to do to make a comeback. And we're all scared, because this isn't a game.

"The people of Detroit know a little something about this. They almost lost everything. But we all pulled together, now Motor City is fighting again."

Chrysler ran an "Imported from Detroit" ad during the 2011 Super Bowl as well.

"I think we need to be careful, and God knows, I mean I can't stop anybody from associating themselves with a message, but it was not intended to be any type of political overture on our part," he said. "We are as apolitical as you can make us. You know, we're just an ingredient of a big machine here in this country that makes us go on... The message is sufficiently universal and neutral that it should be appealing to everybody in this country, and I sincerely hope that it doesn't get utilized as political fodder in a debate."

In one respect, it does appear that Chrysler tried to stay apolitical. The ad uses footage of the pro-union protests that took place in Wisconsin last year, which Madison photographer Matt Wisniewski says was legally licensed from him. However, Chrysler edited the signs in the footage so that their association with the Madison Teachers Inc. union isn't visible.

In spite of what Marchionne may have hoped for the ad, it already appears to be political fodder: The Michigan branch of Obama for America, Mr. Obama's re-election campaign, tweeted Sunday night, "'It's halftime in America. And our second half is about to begin.' Another great Chrysler ad - the US auto industry is back.#Obama2012."

"Saving the America Auto Industry: Something Eminem and Clint Eastwood can agree on," added White House communications director Dan Pfeiffer in a Tweet.

It's not surprising the Obama campaign would embrace the ad's message: The president has touted the revival of the American auto industry as proof that his intervention helped Detroit get back on track. At the Washington Auto Show last week, Mr. Obama said it was worth remembering that there were some leaders "willing to let this industry die."

Not everyone, however, responded so enthusiastically.

"I was, frankly, offended by it," said Republican political strategist Karl Rove Monday in an appearance on Fox News.

"I'm a huge fan of Clint Eastwood, I thought it was an extremely well-done ad, but it is a sign of what happens when you have Chicago-style politics, and the president of the United States and his political minions are, in essence, using our tax dollars to buy corporate advertising," he said.

Chrysler received a $12.5 billion bailout from the federal government in 2008. Following bankruptcy restructuring, the company is now majority owned by Fiat SpA. In 2011, Chrysler earned $183 million, compared with a loss of $652 million in 2010. In June 2011, the Treasury Department said it would recoup all but about $1.3 billion from the company.

White House Press Secretary Jay Carney told reporters today the administration had nothing to do with the ad, but he said it "does point out a simple fact, which is that the automobile industry was on its back and potentially poised to liquidate three years ago, and this president made decisions that were not very popular at the time that were guided by two important principles: He should do what he could to ensure that one million jobs would not be lost, and the American automobile industry should be able to thrive."

As he frames his 2012 campaign message, Mr. Obama will hope to capitalize on the message of hopefulness captured in the Chrysler ad.

At the end of the ad, Eastwood says: "It's halftime America. And, our second half is about to begin."

But while the Obama campaign would want that to invoke that spirit, others might point out that sometimes, halftime is a good time to put in a new quarterback.

The current Republican frontrunner, Mitt Romney, said in a November debate that the auto bailout was "the wrong way to go."

Romney was born and raised in Michigan, and his father was CEO of American Motors Corporation and then the state's governor. He won the Michigan primary in 2008 and is expected to win this primary in the state on February 28.

Romney could try to capture the message of the Chrysler ad as well: His campaign slogan "Believe in America" plays on the notion that the president hasn't. As the economy slowly turns around, Romney has campaigned on the message that Americans should expect more from their leadership. There's certainly plenty of data he can use to make his point: 12.8 million Americans still out of work, or debt at 100 percent of gross domestic product and growing.

As for Eastwood, the actor is Republican and endorsed John McCain in 2008. So far, he doesn't have a preferred candidate. He told Politico last week, "Geez, I don't know. I'm just looking at them all," he said.

This article was corrected to note that Chrysler also ran an "Imported from Detroit" ad during the 2011 Super Bowl, not the 2008 game.