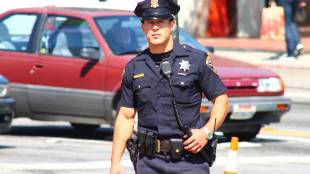 SAN FRANCISCO -- Christopher Kohrs, the San Francisco police officer who gained social media fame as the "Hot Cop," was arrested and charged for a hit and run after a collision with two pedestrians sent them to the hospital over the weekend, reports CBS San Francisco.

Kohrs, a seven-year veteran of the department, will be arraigned in San Francisco Superior Court on Thursday on two felony charges. He is currently out on bail.

Prosecutors allege that Kohrs, whose good looks first grabbed the public's attention as he patrolled San Francisco's Castro District, hit two men in their 40s around 2:20 a.m. on Sunday in the city's "Little Italy" neighborhood.

He is said to have fled but left a Dodge Charger registered to him at at the scene and was identified as its driver, police said. Kohrs turned himself in at police headquarters Sunday morning, and police said they were investigating whether he was driving while intoxicated.

District Attorney George Gascon on Wednesday said that the lack of sobriety testing immediately after the collision could cause problems for prosecutors handling the case and said he was "outraged" by the incident.

"When a law enforcement officer commits a crime, the level of concern becomes much greater," Gascon said. "We're very concerned and we're upset that this happened."

Police have said Kohrs is currently on unrelated medical leave. If he becomes eligible to return to duty, he will then be suspended pending further investigation, the station reported.

The two pedestrians who were hit were hospitalized with injuries that were considered serious but not life threatening, police said.