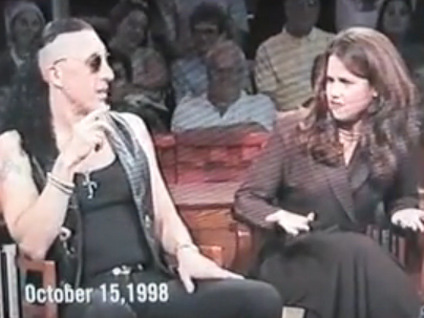 After last week's viral video clip in which the Republican Senatorial nominee from Delaware spoke of having "dabbled into witchcraft," Bill Maher lobbed another blast from Christine O'Donnell's past on his show last night.

In a clip from the Oct. 15, 1998 episode of his old ABC series, "Politically Incorrect," O'Donnell is shown saying "Evolution is a myth."

When Maher challenged her to justify the anti-science statement, O'Donnell says, "Well, then why aren't monkeys still evolving into humans?"

Last week Maher said that he would air more clips of O'Donnell from his old show until she agreed to come onto his HBO series, "Real Time."

He put the two comments into context: "The stuff from the witch last week was silly - who cares what she did in high school and she dabbled with witchcraft?" he said. "But this is somebody who could be in the Senate, who thinks that mice have human brains, and doesn't understand, 'Oh my God, that monkeys don't evolve in the time it takes to watch them?'"

Maher's old show isn't the only one with O'Donnell clips now making their way from the vaults.

A 2003 clip from MSNBCD's "Scarborough Country" features O'Donnell opposing the promotion of condom use to protect teenagers from pregnancy and sexually transmitted disease.

"I tell them to be careful," Eric Nies from the Moment of Hope Foundation says in the video. "You have to wear a condom. You have to protect yourself when you're going to have sex, 'cause they're having it anyway. There's nothing that you or me can do about it."

O'Donnell responds: "The sad reality is -- yes, there is something you can do about it. And the sad reality, to tell them slap on a condom is not..."

Interjects Nies: "You're going to stop the whole country from having sex?"

"I'm a young woman in my thirties and I remain chaste," she adds. "It's unrealistic to think they're just going to do it anyway. Kids are not just dogs in heat."

O'Donnell has said she is no longer talking to national media outlets, and has dismissed comments that have garnered controversy as reflecting her passion for her faith and the experimentation typical of young people.

You can see a slideshow of more controversial past comments from O'Donnell below:

To watch the "Real Time With Bill Maher" clip click on the player below.