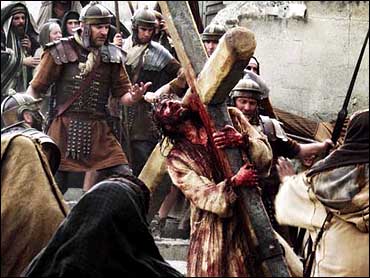 Christ's final agonizing hours of life, and death, as depicted in "The Passion of the Christ," is hardly standard Hollywood drama. Mel Gibson's movie is graphic, violent and so controversial, no major studio would touch it. CBS News Correspondent Mark Strassman reports.

So far, only selected audiences, mostly evangelicals, like at a gathering in Anaheim, Calif., have screened it, and they have come away rapturous.

Sarah Gallegos says, "There hasn't been anything I've ever seen that moved me in such a way."

Gibson's actors speak only Aramaic and Latin. More incomprehensible to critics is Gibson's approach. They say it's anti-Semitic and that it ultimately blames blood-thirsty Jewish mobs for pressuring authorities to order Christ's crucifixion.

Abraham Foxman, national director of the Anti-Defamation League says, "And when there is anti-Semitism rising throughout the world it can possibly again legitimize it and fuel it. The mail that we're getting in the ADL just on the debate is full of anti-Semitism."

But few of those critics have actually seen the movie. They say Gibson won't let them. Instead, he picks more friendly audiences. At a church in Orlando, 5,000 evangelicals watched a rough cut of the movie.

Gibson is trying to market by word-of-mouth among the faithful. Even Pope John Paul has seen it.

The Early Show entertainment contributor and People magazine senior editor Jess Cagle notes, "Mel Gibson's camp says that they have a paper trail saying that, yes, they went through official channels and they got clearance to use that quote: yes, the pope did say it. What it looks like is it became such a hot-button issue that the Vatican did an about-face. I think that someone in the Vatican did say it was historically accurate, but now they're backing away from it."

Gibson, a fundamentalist Catholic, says his movie is literal from the Gospels, and that its goal is to inspire, not to offend.

Cagle, who has seen the film, says it did not seem anti-Semitic to him.

He notes, "I am not a biblical scholar. I am not Jewish. So I hesitate to make that the final word. But when I saw the film, it really did seem like the burden of responsibility for the crucifixion fell on a few Jewish priests. And Mel Gibson really has gone out of his way in the film to make it clear that there were Jewish people in the crowd who wanted to help Christ as he was going up the hill carrying the cross."

Nationwide audiences will judge for themselves beginning Feb. 25, Ash Wednesday. For a religious movie the timing is perfect, Cagle notes.

He says, "The idea that a movie in Aramaic is getting a wide release is really kind of strange and unusual. But I think there are a lot of church groups that will buy big blocks of tickets. So the theaters owners are excited about it. Now there is so much curiosity about the film. The fact that all these people spoke out against it before they saw it has fully been a real blessing for Mel's movie."

And now that people who have seen it say it is not anti-Semitic, Cagle says, "I'm not sure that a lot of major studios aren't sorry that they aren't releasing it themselves."