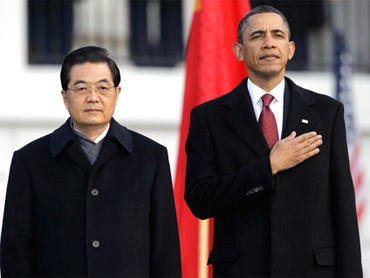 WASHINGTON - Seeking to build ties with an economic rival, the White House said Wednesday that China would purchase $45 billion in U.S. exports, including a highly sought-after $19 billion deal for 200 Boeing airplanes.

The announcement came as Chinese President Hu Jintao arrived at the White House for a state visit with President Barack Obama. The deals could soothe some concerns from the U.S. government and corporate America, both of which contend that China keeps its currency artificially low in order to make Chinese products cheaper in the U.S. and U.S. products costlier in China.

Mr. Obama and Hu met Wednesday with U.S. and Chinese business leaders, including some involved in the new export deals. Mr. Obama said the economic relationship between the two countries is "more complex" than it appears.

"Our goal here today was to make sure that we break out of the old stereotypes that somehow China is simply taking manufacturing jobs and taking advantage of low wages, the U.S. is importing cheap goods and thereby having cheaper products, but also putting strains on our employment base," Mr. Obama said.

Hu told the executives that he welcomed U.S. companies to do business in China, and said his country is speeding up its economic restructuring and trying to increase domestic consumption. Increased Chinese demand for goods is a prime U.S. concern because it could help reduce a U.S.-China trade gap.

In addition to the Boeing deal, China will also invest in U.S. exports from agriculture, telecommunications and technology companies, including General Electric, Honeywell and Navistar. The White House said the deals will support up to 235,000 jobs in the U.S. Executives from Boeing and General Electric were among the business leaders who will meet with Mr. Obama and Hu at the White House.

The indigenous innovation policy China adopted in 2009 limits Beijing's purchase of foreign products to those designed in China. U.S. businesses see the policy as a ploy to force them to turn over their technology to China or be locked out of business with the government.

U.S. software companies have also said they're cheated out of billions in sales because Chinese companies, and even government agencies, illegally copy their programs instead of buying them. China agreed in December to allocate funds in its budget for legal software purchases, and on Wednesday, the White House said China agreed to audit the use of legal software and publish the results of those audits. U.S. officials hailed the move as a significant step forward in transparency for the often secretive Chinese government.Among the companies the U.S. and China reached export deals with are:

- Boeing: China agreed to approve airline contracts for 200 aircraft to be delivered over a three-year period, starting this year. The $19 billion package will support more than 100,000 American jobs, according to the White House.

- General Electric: The White House says GE reached a deal with China Shenhua Energy Company Limited. The joint venture will use GE's cleaner power generation technologies to advance cleaner coal solutions for industrial chemicals, fuels and power generation. GE estimates the deal has the potential to generate up to $2.5 billion in U.S. exports.

- Honeywell International, Inc: Honeywell will work with China's Haier Group to develop and promote low-emission, high energy-efficiency products and solutions. Honeywell estimates the total value of the U.S. export content in the five-year deal is $210 million.