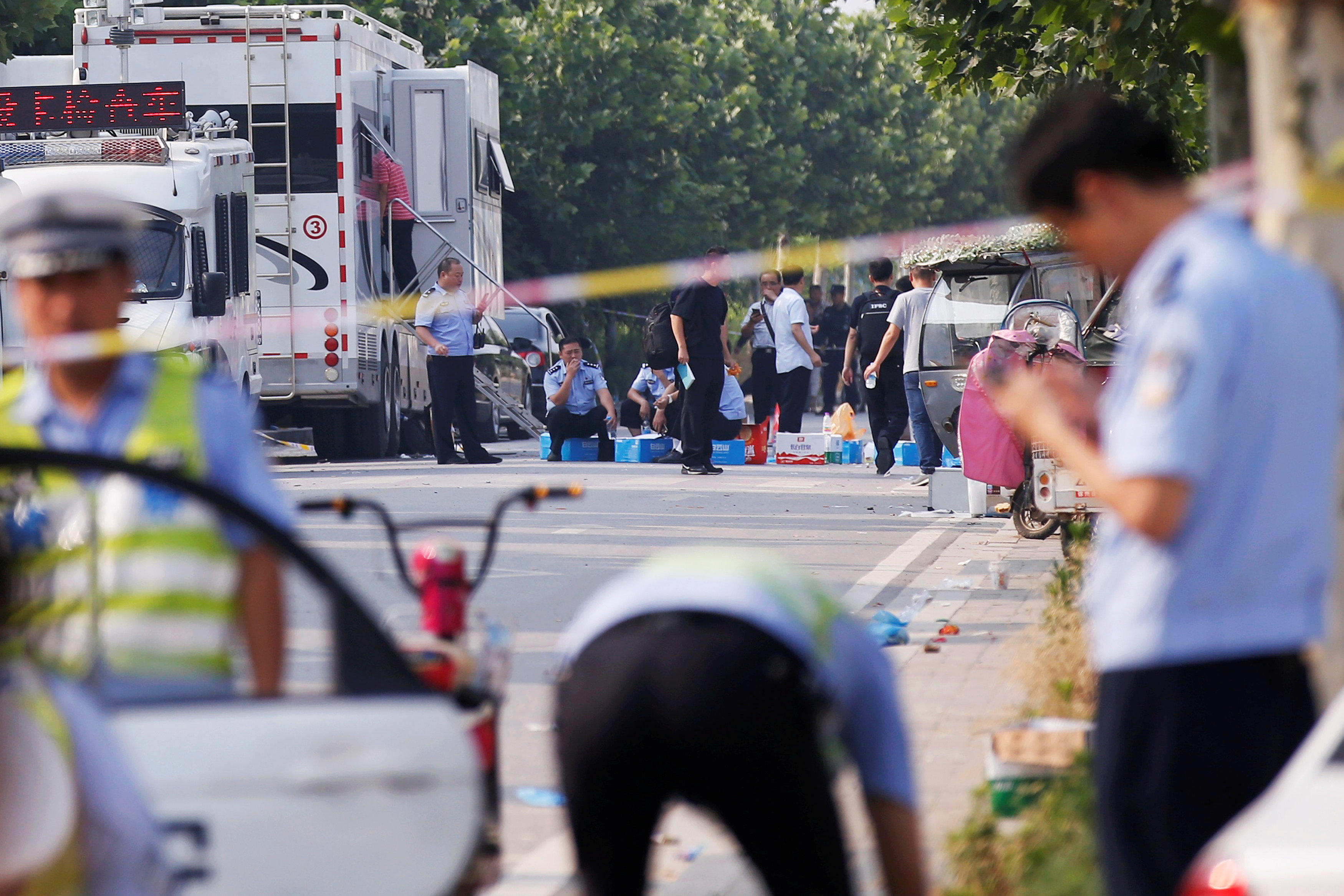 BEIJING -- A 22-year-old man made the bomb that exploded at the front gate of a kindergarten in eastern China, killing eight people, including himself, investigators said Friday, apparently closing the case on one of the worst school attacks in the country in recent years.

Police said the suspect was identified primarily using security camera footage and DNA collected at the scene of the blast, which struck Thursday as relatives were waiting to pick up students at the end of the school day. Only the suspect's surname, Xu, was released and no motive was provided.

Investigators found bomb-making materials at Xu's nearby residence in the city of Xuzhou in Jiangsu province. Emblazoned on its walls were the Chinese characters for death, disaster and other related dark themes.

Xu had left school because of a nervous system disorder, whose symptoms can include depression, anxiety, dizziness, vision problems and problems with basic bodily functions, the police said at a news conference. He had since moved to a rented accommodation in the neighborhood and was working as a casual laborer, the city's deputy police chief, Pei Jun, told reporters.

Two people died at the scene and six died after being taken to a hospital. Sixty-five people were injured, including eight listed in critical condition.

The disorder Xu was described as having is not itself a mental illness. Rather, it suggests he suffered symptoms that could have stemmed from an undiagnosed or untreated mental illness, said Dr. Michael Phillips, a psychiatry professor at Shanghai Jiao Tong University and Emory University in the United States.

Xu could have been influenced by the widespread public attention received by similar past attacks on schools, Phillips said.

"That could influence somebody who wanted their death to mean something in a lot of ways," Phillips said, adding that severity of mental illnesses typically peak at about Xu's age.

The blast at the Chuangxin Kindergarten in Xuzhou's Fengxian county occurred at 4:50 p.m. before school had let out for the day and no students or teachers from the kindergarten were among the injured, according to a statement from local authorities.

However, videos purportedly from the scene showed children -- possibly relatives of the kindergartners or passers-by -- among the casualties.

A witness identified only by the surname Shi said the force of the blast sent people flying several meters into the air, according to the state-run Global Times.

Videos posted by the People's Daily showed a chaotic scene, with children and adults lying on the ground, some of them motionless, their clothes blown off them, and others struggling to get up. Clothing, shoes and other items were strewn across the area beside pools of blood.

The videos showed ambulances arriving, medics wheeling people into an emergency room and medical personnel treating what appeared to be a child.

Kindergartens, elementary schools and students in China have been attacked several times before by suspects authorities have said were mentally ill or bore grudges against their neighbors and society.

Last month, a driver angry over the loss of overtime pay set fire to his school bus in the eastern city of Weihai, killing 13 people, including 11 children from China and South Korea.

In 2010, nearly 20 children were killed in attacks on schools, prompting a response from top government officials and leading many schools to beef up security by posting guards and installing gates and other barriers. Last year, a knife-wielding assailant injured seven students outside a primary school in a northern city.

China maintains tight control over firearms and most attacks are carried out using knives, axes or homemade explosives.